The evolution of Mariah Carey: From wide-eyed teen to songbird supreme 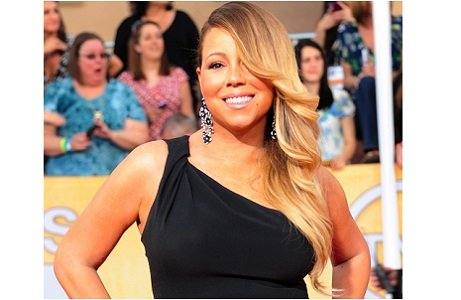 (CNN) — She was often portrayed as the archetypal dumb blonde, but behind the golden locks and hourglass figure, Marilyn Monroe was an astute businesswoman.

"Marilyn Monroe, who I'm a huge fan of, had the first production company as a female, as a woman," Carey told CNN's Nischelle Turner, ahead of the release of her 14th album later this month.

"She played the dumb blonde role, she played it well, but that was not who she was."

Gaze across New York's Times Square today and you'll find giant billboards of a sun-kissed Carey in netted swimsuit, her album title declaring: "Me. I am Mariah."

But Carey had to work her socks off to become the best-selling female artist of the millennium in 2000. A woman who has sold 200 million albums worldwide, and overtaken Elvis Presley's record of U.S. number one singles.

Less silver spoon in her mouth -- "more like a plastic spoon," says the daughter of an opera singer mother in Long Island, New York.

"I didn't fit in anywhere, and so music was the thing that I had to cling on to, that made me feel special and like I had this secret," added the 44-year-old mother-of-two.

The idea of one day making it big, however, was laughable to her classmates.

"I remember once in six or seventh grade, they asked: 'What do you want to do when you grow up?'" said Carey, dubbed the "songbird supreme" by the Guinness Book of Records for her remarkable vocal range.

"I said I wanted to be a singer, I wanted to be an actress. And they were all like 'haha.' Because of course at that point I still didn't really have conditioner or know how to comb through textured hair," said the musician, whose mother is Irish-American and father is of African-American and Venezuelan descent.

The wide-eyed curly-haired girl next door burst onto the music scene in 1990, with her five-octave vocal range and eponymous album that sold a cool 6 million copies.

She has since won five Grammy Awards, been nominated for a Screen Actors Guild Award for her performance in film "The Butler," been a judge on "American Idol," and become a mother to twins she affectionately calls "Dem babies."

Arriving in Times Square in a figure-hugging black dress recently, signing autographs for her screaming fans, or "lambily," as she calls them, Carey is as glossy and glamorous as an old-school Hollywood starlet.

And she didn't get here by accident.

Lauren Said-Moorhouse contributed to this report.