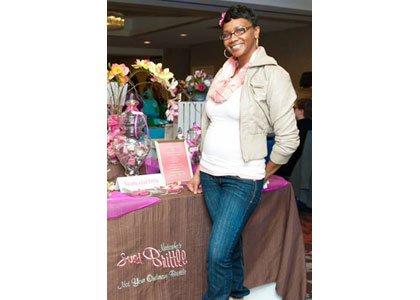 Daycare provider Natasha Wainwright, owner of Progress Place Learning Center (PPLC) in Northeast Baltimore held a small bake sale to help her young students raise money and to learn about business. That was in 2007. Today, what started out as an educational fundraiser has evolved into a booming all-natural treat company called “Natasha’s Just Brittle.”

The company offers a variety of confections, but it most popular item is its brittle. The company’s tagline is ‘Not Your Ordinary Brittle’ and one taste substantiates this claim.

Wainwright’s love of sweets and the need to provide healthy ingredients resulted in the creation of a signature brittle that featured cashews instead of peanuts. The company makes 30 different brittle flavors, which include walnut, wasabi almond, trail mix, sunflower seed, spicy pretzel, Cracker Jack, Old Bay, and coffee lovers.

“I said let’s do a small business and teach them business fundamentals,” said Wainwright reflecting back on the company’s humble beginnings. “The kids said they wanted to make candy, so I found a brittle recipe and decided to try it. Among all of the treats we sold, the brittle out sold the other products and the parents kept asking for it.”

She added, “I also gave the brittle as gifts, made it for parties, etcetera. The brittle became so popular I decided to make it into a business.”

According to Wainwright, she established her website www.natashasjustbrittle.com and begin doing samplings with organizations, which included the National Kidney Foundation.

“People love this brittle,” she said. “It’s uniquely mine. I use every nut, which includes almonds, pistachios, and cashews. I also make pretzel brittle for those who can’t eat nuts.”

According to Wainwright, the recipe does not incorporate corn syrup like most brittles and has no preservatives, artificial coloring or flavoring. She noted that the company uses fresh ingredients, which include a secret blending of organic sugar, salted butter, fresh nuts, and sea salt.

“Each brittle has its own unique recipe,” said Wainwright. “We blend different extracts and spices to get the most flavors from the nut that is used.”

In addition to the brittle, the company also sells a variety of other treats including gourmet apples, and chocolate covered strawberries, potato chips and pretzels.

“I also make chocolate treats with brittle sprinkled on top of it,” she said. “I take classic confections such as potato chips, pretzels, and bacon, and transform them. I also use eco-friendly packaging for the products, which people really like.”

Currently, “Natasha’s Just Brittle” is working with local markets to sell her packaged goods. According to Wainwright, starting in June, she will be cooking and selling her confections at the Bi-Rite Market located at 5950 Belair Road from 6 p.m. until 9 p.m. every Tuesday and Thursday.

Wainwright shared her “recipe” for equally measuring out a busy daycare center and a booming candy company.

“My family, a few close friends, and a lot of long hours help to keep all of this going,” she said. “My daughter helps me cook the pots of chocolate, and I have a kitchen manager who helps me. They are my staff and are the first to taste the brittle. They tell me the truth. I get up in the morning at 4:30 a.m. and cook as much as I can. I also plan. I am always working. We just grind.”

According to Wainwright, she has a steady local and online customer base. The company’s website also features a Brittle Club, which offers three, six, and 12 month subscriptions. She said she also hoping to land a spot on the ABC reality-based television series, Shark Tank to pitch her successful confectionary business.

“I would like to open a store,” said Wainwright. “I also want to see the brittle on every specialty store shelf. I also love serving people. I am also seeking to create jobs for single moms and youth. I want youth to come in with their time, energy, thoughts and ideas. That’s my goal.”