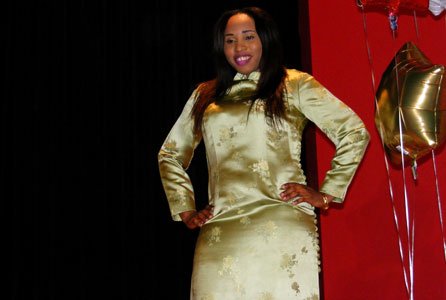 Ogochukwu Nancy Obi, president of the International Students Club was a model in a fashion show which part of the China Day celebrations. Courtesy Photo

BALTIMORE — Over 200 students and members of the community came to the Baltimore City Community College (BCCC) Fine Arts Theatre on Tuesday, April 29, 2014, to focus on China, the world’s most populous nation and the subject of this year’s BCCC International Students Club (ISC) Heritage Day observance.

W. Fontaine Bell, director of the Maryland-China Business Council and chair of the Baltimore-Xiamen Sister City Committee, spoke about current issues in the United States and China relationship, China’s wildly growing economy and prospects for reform of its centralized political system.

“The importance of China to the 21st century economy cannot be understated,” Bell said. “And it’s great we have a community college focusing on these matters at the level we see here today.”

The event was followed by traditional Chinese cuisine provided by China Max, replete with fortune-cookie sendoffs.