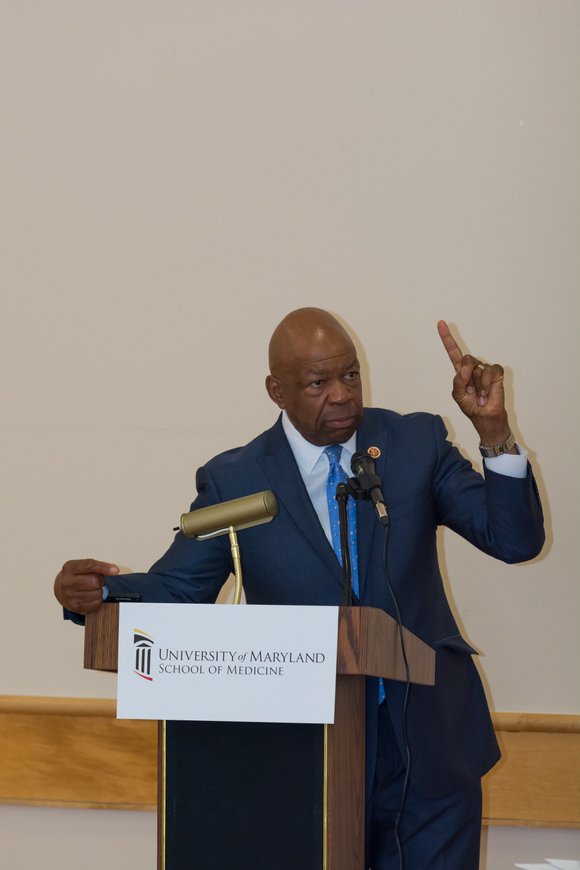 COLUMBIA, Md. — A celebration of the success of the Affordable Care Act (ACA) quickly turned into a passionate plea to lawmakers and others from Dr. Claudia Baquet and her guests to continue to press for the elimination of healthcare disparities.

Dr. Claudia Baquet, associate dean for policy and planning and director of bioethics and health disparities at the University of Maryland School of Medicine in Baltimore.

With a fervor usually reserved for a House filibuster or a mid- Sunday morning sermon Representative Elijah Cummings highlighted the benefits of the ACA and its key role in improving healthcare at the event held in Columbia on Monday, May 5, 2014. Cummings and other panelists urged everyone not to remain silent about healthcare disparities and not to accept empty answers from opponents of President Barack Obama’s signature legislation.

Cummings spoke movingly of not knowing his grandfather and how better healthcare, particularly for African Americans, could have made a monumental difference.

“My grandfather died before I was born. He was the voice that I never heard, the one whose picture that I’ve never seen and whose writings that I’ll never read,” Cummings said, before speaking of how his own father, who died of a heart attack 12 years ago, told him the story of his grandfather.

“When my father was about 9 or 10, my grandfather had been in the pulpit preaching and he fell ill,” he said. “Back then, African Americans couldn’t go to certain hospitals and they were fortunate enough to take my grandfather home in a wagon and when they got there, they were able to get two doctors, a young doctor and a senior doctor and my father remembered that the young doctor said that if we don’t get this man to a hospital, he’ll die very soon. The older doctor said, ‘Boy, don’t you know that he’s only a [Negro].’”

Cummings’s grandfather died that night and he says he understands what it’s like to not have health insurance and that is what helps to drive his passion today.

“When it was time to vote on the Affordable Care Act, I showed up four hours early. I had just one prayer which was that God not let me die before I cast that vote because as far as I’m concerned, I knew this was probably the most important vote in my 30 plus years of being a member of Congress,” said Cummings, who later related a story about a man he knows who was faced with having to decide whether to spend $250,000 on cancer treatment to keep him alive for about two years or to spend that money to put his daughter through medical school.

Hosted by Dr. Baquet, the associate dean for policy and planning and the director of bioethics and health disparities at the University of Maryland School of Medicine in Baltimore, the event also featured a briefing on the supplement included in the 25th anniversary of The Journal of Healthcare for the Poor and Underserved.

Participants enjoyed a breakfast to help celebrate the eight million individuals who signed up for coverage under the ACA and the three million young people who will continue to receive benefits under their parents plan until they are 26 because of the law.

“I didn’t know whether I should preach or pray,” said guest speaker Carlessia Hussein after Cummings’s remarks.

“The work is not over, there is still a lot to be done,” said Lisa Carr, the associate director at the Health and Human Services Center for Faith-Based and Neighborhood Partnerships where she focuses on outreach, education and enrollment into the ACA.

Baquet says that work remains particularly because just 27 states have agreed to implement the expansion of Medicaid while 19 others have not, despite a high concentration of minorities in need.

“We’ve come a long way, but we have to get back to worrying about the people who sent us here and the people we’re trying to help every day,” Cummings said. “We have to amplify our voices. My mother said to me when I was a little boy that she wanted me to go up the ladder but she didn’t want me to fall down. Protect your progress and build on what we have to make it better. I believe in my heart that it’s important for me to use the power that you have given me to make sure that other little Elijahs have a chance to know their grandfathers.”