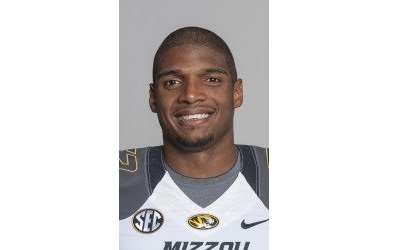 (CNN) — Not long after Michael Sam became the first openly gay player drafted to the NFL, some made clear his reaction was not welcome.

Immediately after learning of his selection by phone, a visibly emotional Sam turned to his boyfriend and kissed him.

"I'm sorry but that Michael Sam is no bueno for doing that on national tv," former Super Bowl champion Derrick Ward tweeted.

"Man U got little kids lookin at the draft. I can't believe ESPN even allowed that to happen," Ward added.

Ward said he has received death threats against him and his children after the comments.

Miami Dolphins safety Don Jones also expressed his disapproval, tweeting "horrible" and "OMG" after the kiss was aired. He has since deleted those comments.

But the Dolphins responded quickly, ordering Jones to pay an undisclosed fine and barring him from team activities until he finishes "training for his recent comments made on social media."

"We met with Don today about respect, discrimination and judgment," the Dolphins said in a statement Sunday. "These comments are not consistent with the values and standards of our program."

Jones issued a mea culpa for his remarks.

"I want to apologize to Michael Sam for the inappropriate comments that I made last night on social media," he said in a statement Sunday.

"I take full responsibility for them and I regret that these tweets took away from his draft moment. I remember last year when I was drafted in the seventh round and all of the emotions and happiness I felt when I received the call that gave me an opportunity to play for an NFL team and I wish him all the best in his NFL career."

The reactions extended well beyond current and former NFL players.

"It's annoying that people can't say anything about the Michael Sam kiss without people pointing at them saying "homophobe," Robby Schultz said.

But many welcomed Sam's 7th-round selection by the St. Louis Rams. His new team is just two hours away from the University of Missouri, where Sam was an All-American and the Southeastern Conference's defensive player of the year.

"The President congratulates Michael Sam, the Rams and the NFL for taking an important step forward today in our Nation's journey," the White House said in a statement. "From the playing field to the corporate boardroom, LGBT Americans prove everyday that you should be judged by what you do and not who you are."

Some compared Sam kissing his boyfriend to other athletes kissing their wives or girlfriends.

Others poked fun at the controversy surrounding Sam.

"How do I explain Michael Sam to my kids?" Andy Kerman tweeted. "A man with TWO first names?"

CNN's Joe Sutton and Joseph Miller contributed to this report.