Sterling asked: What has Magic Johnson done? Answer: Quite a lot

His foundation has raised millions 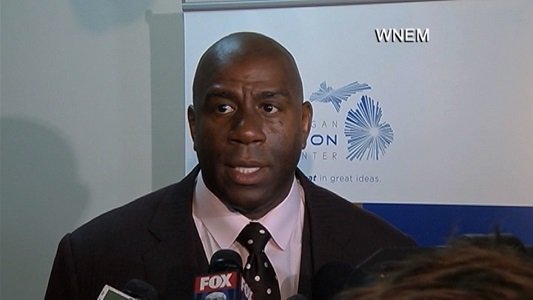 continued — And so, he says, his work isn't done.

The same month he tested positive for HIV, he formed the Magic Johnson Foundation which "works to develop programs and support community-based organizations that address the educational, health and social needs of ethnically diverse, urban communities."

In the two-plus decades since the world gasped at his HIV announcement, the foundation has raised more than $20 million for charity and given out almost $4 million in scholarships.

As it turns out, Johnson was a pretty good businessman too. He founded MJ Enterprises in 1987.

The focus again was on serving diverse communities, bringing high-quality businesses to minority areas typically under served by larger corporations.

And Johnson seemed to invest in nearly everything -- theaters, restaurants, fitness centers, sports teams and a TV network.

A partnership with Starbucks CEO Howard Schultz made him millions. So did a share of the Lakers he bought and sold.

All together, Johnson's business empire is estimated at $500 million.

With numbers like that, it's no surprise that Johson's longtime agent and friend Lon Rosen came to his defense Monday night, saying Magic was "the exact opposite" of the way Sterling portrayed him in the CNN interview.

"I've known Earvin since 1979 and his whole mission in life has been to create business opportunities in urban America and to be charitable," Rosen said in a Los Angeles Times interview on Monday. "He has literally donated tens of millions of dollars of his own money to organizations and individuals forever and ever and ever."

For his part, Johnson didn't dignify Sterling's contentions with a remark.

Johnson posted a series of tweets after the interview aired, but he didn't respond to the specific allegations.

"I'd rather be talking about these great NBA Playoffs than Donald Sterling's interview," he said in one.

"After this week, no more Sterling talk. Just the NBA Playoffs," he said in another.