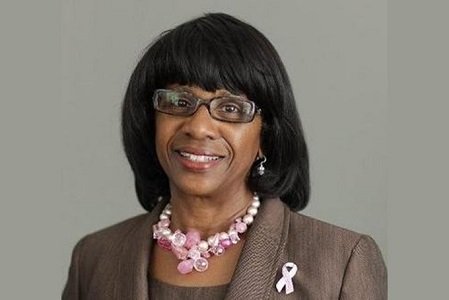 (NNPA) — This August, another glass ceiling will be shattered when Paulette Brown begins her term as president-elect of the American Bar Association and becomes the first Black woman to ever ascend to the position.

Brown will serve as president-elect for one year before taking over as president in August 2015.

Brown was raised in northwest Baltimore as the daughter of two working parents, Wilbur and Thelma Brown, who protected her and kept her so focused on her school work that she said she had never even heard of marijuana until she reached college.

Brown entered Howard University as a freshman with the intention of becoming a social worker, knowing that she wanted to help people. Far from her mind was the possibility of leading the 400,000-member ABA, which sets standards for lawyers and law schools throughout the country.

“It never occurred to me,” said Brown.

Over the course of that first year at Howard, however, she realized law, not social work, was her true vocation. After graduating from Howard, Brown received her law degree from the Seton Hall University School of Law, and has been practicing law since 1976. She is a partner in a New Jersey law firm where she specializes in labor law, employment law and commercial litigation.

“When I first started going to court and so forth,” said Brown, “I had the usual experiences. ‘Are you the defendant? Are you the court reporter? Are you the plaintiff? No? Well then, who are you then?’ It never occurred to them that I could be the lawyer.”

Despite her election to the ABA’s top post, she said she still faces such assumptions.

“I’m still asked whether I’m a flight attendant,” she said. “As recently as two weeks ago.”

It is this persisting presumption of Black female inferiority that makes her election to the presidency of the ABA so historically significant.

“Her ascension to the presidency just opens the door for so many African-American females to even believe that that is possible,” said Alicia Wilson, the fundraising committee co-chair for the Alliance of Black Women Attorneys of Maryland. “She has broken down barriers and opened up doors and kept them open for a whole host of African-American women attorneys.”

After 38 years in a White-male dominated profession, Brown has encountered, challenged, and broken through many a glass ceiling, and has left a legacy of often unsung accomplishments. She said her father helped set her success in motion by instilling in Brown the value that there is no such thing as “women’s work.”

“My father always said there were no girl jobs and no boy jobs,” said Brown. “My brother had to wash dishes and clean up just like we did—and my father did too. He did laundry, he cooked, he did everything. And he went to work every day.”

Brown said she believes that her selection by the ABA leadership as its next president carries with it a great responsibility.

Because the term of ABA president only lasts one year, Brown said she is determined to focus on no more than three goals for which she can produce tangible results within that time frame. While the exact areas of focus are still being negotiated with a group of trusted advisers, among her possible areas of interest are increasing awareness of the fact that the elderly are often among the groups most subjected to domestic violence, as well as the need to improve the access to counsel for those who cannot afford it under the Supreme Court’s decision in Gideon v. Wainwright.

One thing she will certainly do, however, is make sure that wherever she travels in an official capacity for the ABA she has the opportunity to impact young children who themselves may not see the possibility of a position like ABA president in their future.