‘For Whom It Stands: The Flag and the American People’ 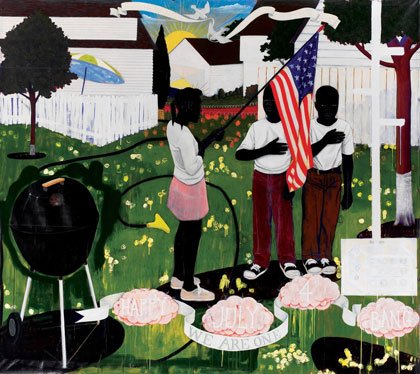 For Whom It Stands: The Flag and the American People is a 3,200 square foot exhibition that will open on Saturday, May 17, 2014 at the Reginald F. Lewis Museum in Baltimore, Maryland. More than 100 works of art, artifacts, documents, and photographs reflect the breadth of American experiences. (Above): Bang, 1994, acrylic and collage on canvas, The Progressive Art Collection. (Photo: The Progressive Corporation, Mayfield Village, Ohio)

BALTIMORE — The new exhibition at the Reginald F. Lewis Museum of Maryland African American History and Culture, “For Whom It Stands: The Flag and the American People” explores the U.S. flag and the diversity of Americans for whom the flag stands, as represented through artwork and artifacts.

During the War of 1812, flag maker Mary Pickersgill sewed the original Star-Spangled Banner in a house on the same city block as the Reginald F. Lewis Museum. While Pickersgill's story is well known, less mentioned is the story of Grace Wisher. Wisher's personal effects are not on display and may have been lost to history. Her untold story urged us to share other stories about the flag, so that they are not lost.

“For Whom It Stands” features more than 100 works of art, artifacts, documents, and photographs that reflect the breadth of American experiences. The Veteran is a mixed media work on skateboard by Rafael Colón, a self-taught Puerto Rican artist. A Tribute to New York City sculpted by Israeli-American Dalya Luttwak sits in the same show as Prayer Rug for America, by the Arab American, Helen Zughaib. Other pieces include a photograph of the Navajo code talkers who communicated the message to our U.S. soldiers to raise the flag at the Battle of Iwo Jima, and a mixed media work by Chinese-American Flo Oy Wong about the detention of Chinese immigrants at Angel Island. View images from the exhibition.

A fragment of the original Star-Spangled Banner serves as a starting point to investigate the broad history and representation of the United States flag as an icon of our nation and its people. A sound installation selected by music curator Shodekeh features pivotal interpretations of the national anthem.

"For Whom It Stands seeks to tell the stories of the flag with a wide-angled perspective in which we all can see ourselves reflected in the national fabric," says the exhibition's curator, Dr. Michelle Joan Wilkinson.

Fine art photographer and artist-in-residence Sheila Pree Bright photographed museum visitors and students of City Springs School during her residency. She asked the subjects to pose with the flag to elicit their opinions on what it means to be American. Select portraits are the source for two new photo installations: one inside the museum and the second at City Springs Elementary/Middle School, 100 South Caroline Street in Baltimore, Maryland. Mayor Stephanie Rawlings-Blake visits the installation process at City Springs School on May 14 at 11 am.

In this premiere performance, several individuals share their true stories of flag-related memories, including a man who was neighbors with the men who brutally murdered Emmett Till and who then lost his fiancée on 9/11. Weaving music, poetry, movement, and song throughout, this original program stirs us to reflect on our own relationship to our flag, our country, and to each other. The director, Harriet Lynn of Heritage Theatre Artists' Consortium, leads a post-performance discussion between the participants and the audience.

During Caribbean American Heritage Month, we screen The Merikens, a documentary about a community in Trinidad descended from enslaved people of the Chesapeake. The ancestors of Merikens were runaway slaves who joined the British forces during the War of 1812. In exchange for their service, they were resettled in a British colony after the war. St. Veronica's Youth Steel Orchestra closes out the afternoon with a Caribbean-style rendition of our National Anthem. The event is a part of the Smithsonian's national Raise It Up celebration.

Companion Exhibit For Whom It Stands, TOO Opens

The museum held an open call for flag-related artwork. Selected works are included in For Whom It Stands, and in this companion exhibition. For Whom It Stands, TOO will be on view at the Star-Spangled Banner Flag House & Museum, 844 E. Pratt Street, Baltimore, Maryland.