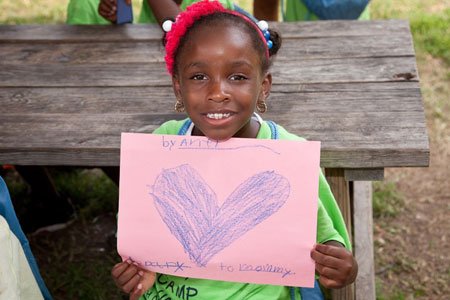 A Camp St. Vincent camper shows off a drawing that she made for her mother during her “Discover Me” lesson about family. (Right) A high school volunteer counselor at Camp St. Vincent congratulates a camper during their sports activity. Courtesy Photo

BALTIMORE — Vena Carter has seen the difference made by the presence and activities of Camp St. Vincent, a free summer day camp that serves homeless children who live in Baltimore City and County.

Carter, the director of the camp, located in Patterson Park in Southeast Baltimore, said not only have the children and their parents benefited from the various services, but those who help to provide activities have also profited.

“We have a daily camper attendance of 120 and we have a staff of about 12 with between 25 and 30 volunteers each week,” Carter said. “I feel like we’ve made a difference, even with my staff because the turnover ratio has been very low and my staff members seem to want to return every year.”

Camp St. Vincent, which opens for the 2014 summer season on June 23, provides a supervised environment with academic, therapeutic, and enrichment programming for children ages five to 12 whose families are among the homeless.

“We work with 18 homeless shelters and transitional houses in the city and the county and the feedback from the parents have been great because they don’t have to worry about their children for eight weeks and it gives the parents an opportunity to seek jobs and other necessary pursuits,” Carter said.

Each day, children are provided breakfast and lunch while also performing what Carter called fun facts on math and other academic subjects. She says the camp’s program is specifically designed to address the impact of homelessness on academic, social and emotional development with a structured reading and math curriculum, social skills group, and cultural enrichment activities.

“Camp had an indescribable impact on my children experiencing homelessness for the first time,” Toya, a mother of three, said in a news release from the camp. “It helped them emotionally to know that being homeless was only temporary, and that there were other kids going through the same thing.”

Toya’s oldest child, Taj, was introduced to a new book at the camp, which proved to have a profound effect on the teen.

“It’s a story about a girl in Ohio whose family loses their house. It’s about their struggles,” Taj said. “I liked it because it related to me and what my family is going through.”

Among the many benefits of the camp, officials say it can prevent students from losing up to two months of reading and math during the summer and among homeless children, summer learning loss occurs at more than twice the rate of children who are not homeless. More than 80 percent of the children who attended Camp St. Vincent last year have either maintained or increased their reading level and 85 percent maintained or increased their math skills, according to camp officials.

This year, a special program for 13-year-olds has been incorporated and students will be provided training in soft skills, helping them prepare for future success in the corporate world.

Through a partnership with Healthcare for the Homeless, the camp also supports the health care plan for the campers and, an added enrichment class by the Carrie Murray Nature Center also provides support to campers.

“The kids really do gain a sense of purpose,” Carter said.

The number of sponsors helps to determine how many children attend each year.

Carter says that additional sponsors are always needed. Currently the camp’s biggest needs are donations of healthy and nutritious snacks.

“We don’t get funding for snacks, but the children do get hungry even after eating breakfast and lunch, so it would be helpful,” Carter said.