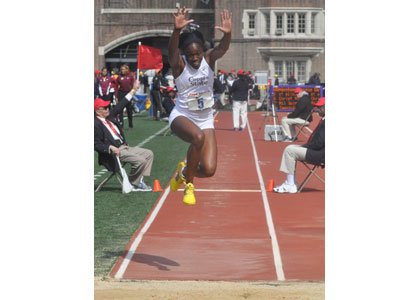 (ECAC/IC4A) Championships at Princeton University’s Weaver Stadium track by leaping a season best 43 feet.50 inches (13.12 meters) on Sunday, May 18, 2014. The ECAC championship is a perfect complement to the ECAC indoor triple jump crown she won as well as the Mid-Eastern Athletic Conference (MEAC) indoor and outdoor triple jump championships she captured as well.

Sophomore standout Deandra Daniel was second in the high jump with a clearance of 5-11.50 (1.82 meters). The four-time MEAC high-jump champion still is tied for the seventh best effort in the event heading into the NCAA East Regionals. Senior Jennifer Mitchell finished eighth in the triple jump with an effort of 39-10.75 (12.16 meters). Together, the terrific trio of CSU women helped them score 19 points in the team standings, which was 16th overall out of 57 schools that scored at least one point.

On the men’s side, Rosen Daniel, Donell Taylor and Shane Green all finished among the top four in their respective events. Inspired by those individual efforts, the Eagles’ 4 x 400-meter relay team also had their fastest performance of the season in finishing fourth in their event. Daniel was a beast all weekend and it continued Sunday as he finished second in the 400-meter run in a time of 46.53 seconds. He ran a season-best 46.38 in Saturday’s preliminary race, it was an effort that bumped Daniel in the top 20 in the event as he has the 19th-best performance overall in the NCAA East Region. That time was the second fastest in school history in the 400-meter dash. The school record in the event is 46.21 seconds held by Karanja Alexander, who set the mark in 2002.

Taylor was fourth in the 400 as he crossed the finish line in 47.09 seconds. Taylor had a season-best performance in Saturday’s (May17th) preliminary round of 47.03, which is 41st in the region and may be enough to earn him a trip to the NCAA East Regionals in Jacksonville in two-weeks. Meanwhile, Green was also fourth in his signature event, the triple jump as he leaped 48 feet, 11.50 inches. The Eagles’ 4 x 400-meter relay team of Michael James, Kester Chase, Daniel and Taylor finished their race in 3 minutes, 8.96 seconds. In the 4 x 1, the Eagles finished eighth overall (41.73 seconds).

The official list of qualifiers for the NCAA East Regional will be released later this week on the NCAA website. The Regionals will be held at the University of North Florida in Jacksonville from Thursday, May 29 through Saturday, May 31.