Patriotic ceremony to honor Marylanders who serve on Memorial Day 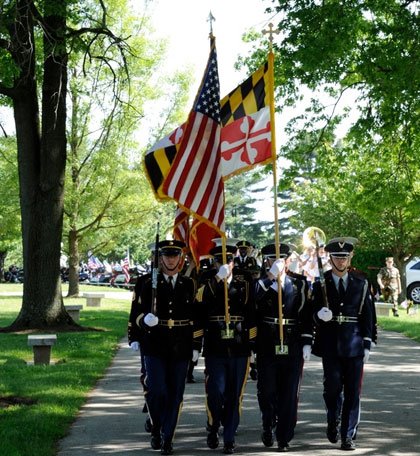 TIMONIUM, Md. — Timonium, Md.— The annual Memorial Day celebration at Dulaney Valley Memorial Gardens, which salutes the men and women of the armed forces who have paid the highest price in defense of the United States of America, will take place Monday, May 26, 2014 at 10 a.m., in the cemetery's Circle of the Immortals. The traditional Memorial Day observance is free and open to the public.

Master-at-Arms 2nd Class Mark A. Mayo, the only Maryland fatality in the past 12 months will be honored. U. S. Navy Petty Officer Mayo, a Hagerstown native, was fatally shot on March 24, 2014, while trying to stop a civilian gunman from harming a shipmate.

In addition to honoring those fighting the battles of today, the Memorial Day Ceremony will also pay tribute to those who gave their lives in Korea, Vietnam and World War II.

·Janice Chance, president, Maryland Chapter, American Gold Star Mothers, an organization of mothers who have lost a son or daughter in the service of our country.

The Memorial Day Ceremony is held in Dulaney Valley’s Circle of Immortals, an area dedicated in 1967 and reserved for Marylanders killed in action. Twenty-six men who died in Vietnam are buried within the Circle. The area is also home to the official Baltimore County World War II/Korean War Memorial, dedicated in 1998; and The Children of Liberty Memorial, which was added to the Circle in 1990 and is dedicated to Maryland servicemen and women who died at the hands of terrorists. It includes a plaque dedicated to the seven Maryland servicemen who lost their lives in the 1991 Liberation of Kuwait, the names of the three Maryland servicemen killed in 2000 aboard the USS Cole and the names of the servicemen killed in the September 11, 2001 attack on the Pentagon.