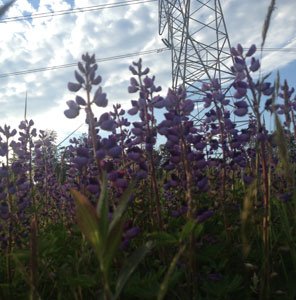 BGE and the University of Maryland worked together to preserve the rare sundial lupine from extinction. Now, the lupines, along with more than 50 other rare and endangered plants, are flourishing on BGE rights-of-way. (Courtesy Photo)

In celebration of National Endangered Species Day, Baltimore Gas and Electric Company (BGE) announced that the company continues to celebrate the protection, successful revitalization and increased population of one of Maryland’s most rare and beautiful wildflowers— the sundial lupine. Protecting the sundial lupine is a collaborative effort between BGE and the University of Maryland’s Arboretum and Botanical Garden. BGE works with many community organizations and environmental groups across the state, to identify, preserve and protect rare and endangered species that live on its transmission and distribution rights-of-way.

BGE first learned of the rare wildflower growing on a rocky knoll on a right-of-way in Baltimore County in 2010 when Dr. Sara Tangren, project leader for the University of Maryland’s Arboretum and Botanical Garden, reached out to BGE. The company immediately took action as company foresters took the lead to rewrite BGE’s site vegetation management plans to help nurture and preserve the wildflower. By 2011, a healthy lupine meadow covered nearly an acre of land— the only lupine meadow in Baltimore County. In the past two years, additional lupine sites began to flourish in Anne Arundel County, thanks to the collaborative work between BGE and the University of Maryland. Today, BGE continues to team up with Dr. Tangren in efforts to preserve and revitalize the population of sundial lupines on its right-of-ways.

“This has been a unique and rewarding experience to aid in the preservation of such a beautiful and rare native species, as well as to preserve other wildlife that relies on the lupine to survive,” said Greg Kappler, principal environmental scientist for BGE. “BGE has a strong commitment to environmental stewardship and working closely with Dr. Tangren and the University of Maryland’s Arboretum and Botanical Garden to protect the rare lupine population growing on BGE’s rights-of-way is just one example of the many ways in which we work with the communities we serve to preserve and enhance Maryland’s natural habitat. Because of our focus and long-standing commitment to environmental preservation, there are now more than 50 rare and endangered plants growing and thriving on BGE’s rights-of-way.”

Phlox pilosa (Downy Phlox) – this plant was originally listed as extirpated by the state, however; because of the population on BGE property, it is now listed as endangered