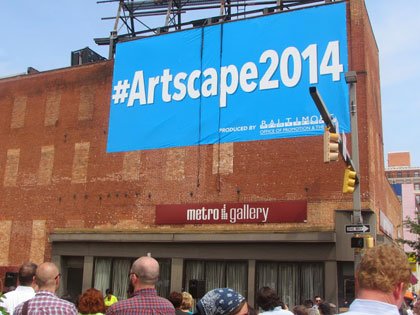 Artscape, which highlights the nation’s best in the visual and performing arts, will take place Friday, July 18, 2014 through Sunday, July 20, 2014 on Mount Royal Avenue and North Charles Street. (Courtesy Photo)

BALTIMORE — Artscape, which highlights the nation’s best in the visual and performing arts, will take place Friday, July 18, 2014 through Sunday, July 20, 2014 on Mount Royal Avenue and North Charles Street. The 2014 festival will be headlined by Sharon Jones & The Dap-Kings, Ozomatli, Galactic, and Anthony Hamilton.

In 2014, Artscape invites festival-goers to Join the movement! with an emphasis on dance and all things motion-related, including Silent! Disco in Pearlstone Park, Dance! at The Lyric, kinetic contraptions along Mount Royal Avenue, ballroom dancing on Charles Street, and the new Aerial Arts Arena.

“Once again this year’s festival is free. It is important that we maintain keeping the festival free as it is important to economy of Baltimore, through tourism, economic development, helping the population grow, and getting people who live here to stay here in Baltimore,” Mayor Stephanie Rawlings-Blake said.

So what’s new this year? The Fred Lazarus IV Artscape Prize (“The Fred”) is a competitive program that seeks to recognize and encourage artistic talent in Baltimore City. Rising high school seniors may apply for the prize, which awards $1,000 to a Baltimore City school student artist. The selected artist also receives a stipend to produce a solo exhibition in conjunction with the annual festival, with mentorship from the Baltimore Office of Promotion & The Arts. The prize is named in honor of the Maryland Institute College of Arts’ long-serving president.

When it comes to the concerts, which will be held at various locations, expect to hear some jazz, blues, ska, sunk, soul, and hip-hop. Some of the artists on tap include Kevin Jackson, Sharon Jones & The Dap Kings, The Joe Cooper Project, Emily King, and Anthony Hamilton.