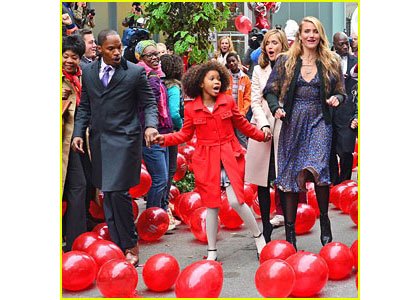 The new movie, “Annie” starring Jamie Foxx, Cameron Diaz and Quvenzhane Wallis is scheduled to be released across the country at Christmas time. (Courtesy Photo/Columbia Pictures)

Jada Pinkett Smith knew from the very moment she saw Quvenzhane Wallis the 10-year-old would make the perfect “Annie.”

“It wasn’t difficult at all choosing her, she has the size, charisma and the talent,” said Pinkett Smith, a Baltimore School for the Arts graduate and the wife of superstar Will Smith.

The comment shouldn’t be taken lightly because Smith’s own daughter, pop star Willow, had originally been tapped to play the lead role but Hollywood’s power couple decided on Quvenzhane because of her age and sheer talent. Willow, age 13, has simply outgrown the part.

Quvenzhane, who received an Oscar nomination for her outstanding performance in the 2012 film, “Beasts of the Southern Wild,” joins a cast that includes Jamie Foxx and Cameron Diaz.

The Hollywood heavyweights have begun putting the finishing touches on, “Annie,” which is scheduled to hit theaters in Baltimore and around the country in time for the Christmas holidays.

“It’s something that’s been in production for a little while and I’m really looking forward to it,” Quvenzhane said in a previously published interview. I’m honored to have been chosen.”

In March this year, Pinkett Smith, who is co-producing the film with her husband, Will and hip-hop impresario Jay-Z, released the first trailer for the movie which depicts Quvenzhane and others in the All-Star cast dancing and singing to favorites such as, “It’s a Hard Knock Life” and “Tomorrow.”

“Just think, three years ago, [Quvenzhane] was a truck driver’s daughter in small town Louisiana, now, the other side of an Oscar nomination for best actress, she’s likely to be the mainstay of a potential Christmas blockbuster film,” said film critic Andrew Pulver, who writes for the Guardian in Great Britian. “And, she’s still only 10. Quvenzhane Wallis’ acting career is nothing short of miraculous, so it’s probably appropriate that she’s the star of a remake of ‘Annie.’”

Directed by Will Gluck, “Annie” is the story of an orphaned young girl who finally gets an opportunity to escape the madhouse and cruelty of an orphanage and its mean headmistress.

In the Smith/Jay-Z version, Annie encounters Benjamin Stacks and not the original’s Daddy Warbucks.

Stacks is campaigning for mayor of New York City and, after a chance encounter with Annie, he strikes an unusual bond with the young girl and becomes a father figure to her.

The remake updates the original, which was set in Depression-era New York.

The trailer offers several references to how the film has been updated, with references to social media and the housemistress, played by Diaz.