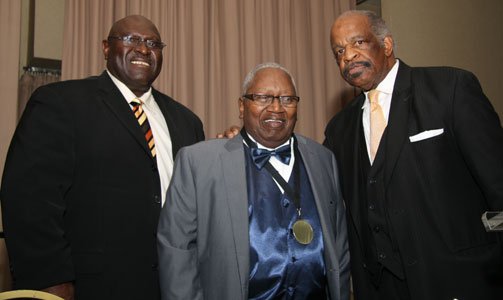 BALTIMORE — Five hundred well wishers gathered the evening of Friday, May 23, 2014 to celebrate the end of Reverend Dr. James B. Gray, Jr.’s successful four year journey as president of the United Baptist Missionary Convention (UBMC) of Maryland and its Auxiliaries, Inc.

According to Dr. Gray, he enjoyed every minute of his presidency, which included several accomplishments that will impact the convention for many years to come. One of the most noticeable accomplishments was the revision of the constitution, which changed the officer election procedures along with the addition of the newly organized Children, Youth and Young Adult Auxiliary.

Instead of having a keynote speaker, greetings and accolades were delivered by current and former UBMC officers, auxiliary leaders, Pleasant Zion Church leaders and family members. Vice presidents, including the newly elected president, Rev. Dr. Cleveland Mason, spoke of the evening as being a “happy and reflective time” Other speakers frequently referred to Dr. Gray as a “man empowered by the vision”

Speaking for the family, his daughter Marvella Gray revealed how happy she is that the family can now cruise the waters without interruptions due to her father’s constant telephone conversations regarding convention issues.

In a previously recorded video interview by Rev. Domanic Smith when asked how he would like to be remembered, Dr. Gray stated that he wants people to remember that,“I did my best.” The video also shared some of his past history and intimate thoughts with guests at the event.

Even though the Martins West celebration was designed to pay tribute to Dr. Gray, he took time to thank the past presidents and a number of other people who he felt were helpful to his administration. Throughout his tenure, he humbly said, “I can’t do it by myself.”

“He is a good man, a kind man,” said Rev. Coger and added that God has more things in store for him.

Music for the occasion was provided by soloist Jewel Perry, the Statham Singers and the Just Us Jazz Band.