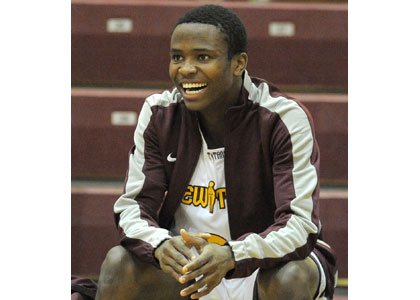 Here is the scenario: You are separated from your mom until the age of nine; your mother works three jobs to provide for the family; someone in your home gets murdered. What are the odds that you make it? This week’s Student of the Week, Danny Shand lived this.

According to mentor Choo Smith, a former Harlem Globetrotter who now owns and operates Choo Smith Enterprises, Danny’s mother knew she needed help raising her son. “When Danny’s mother came to me when he was 14 years of age, she asked me to help her with her son. I took the challenge because I saw the potential in this kid when others gave up on him," said Smith.

Choo set out to make sure Danny focused on his education, which had not been a priority. Entering his freshman year of high school, Danny had a grade point average of 1.3 and each year he worked to improve it. During his senior year, he made the honor roll. Not only that, Danny is Second Team All-Metro in basketball.

On May 28th, Shand announced he would be attending Barton College a Division 2 college on a full scholarship. “Danny chose that school, because he felt that college would not let him fail in academics. When he went for a campus visit, he was more concerned about the campus library, since that is where he wants to spend his time.” Said Smith.

When others were telling Danny he would never make it, Danny believed in himself. With the support of his mother and mentor Choo Smith he proved them wrong.

Congratulation to Danny Shand, our Student of the Week.