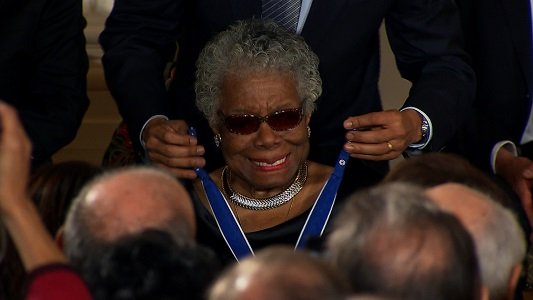 In true Maya Angelou form, the poet’s last words to the public were as profound as any others the great wordsmith had previously uttered.

“Dr. Maya Angelou passed quietly in her home before 8 a.m. Her family is extremely grateful that her ascension was not belabored by a loss of acuity or comprehension,” Angelou family members said in a statement. “She lived a life as a teacher, activist, artist and human being. She was a warrior for equality, tolerance and peace. The family is extremely appreciative of the time we had with her and we know that she is looking down upon us with love.”

Like many of her fans and those who emulated Angelou, Ardyss Rutledge, a Baltimore resident and aspiring poet, says she is devastated.

“It’s one of the worse days imaginable,” said Rutledge, who has written about four dozen poems after being inspired by Angelou’s 1969 autobiography, I Know Why the Caged Bird Sings. “When I read that, it was all that I needed to know that anyone can face obstacles head on and come out victorious.”

Perry Singleton, who lives in Essex and is an English major at the University of Maryland, says Angelou’s works remain unmatched.

“There will never be another Maya Angelou. What she did with a pen, a typewriter, has never and will never be repeated,” Singleton said. “I idolize her, not just for her work, but for her courage and her willingness to spread a positive message.”

Born April 4, 1928 in St. Louis, Angelou’s biography notes that at the age of three, her parents divorced and she and her brother were sent to live with their grandmother in Arkansas.

Her mother’s boyfriend sexually assaulted Angelou when she was just eight and, when family members found out about the attack, it wasn’t long before her attacker was murdered, incidents that sent the young girl into even more shock and rendering her unable to speak for a half dozen years. That’s when Angelou began to write and she took up a primary interest in poetry.

A single mother, Angelou supported her son by waiting tables at diners and restaurants, but she also had a passion for writing, music and dancing. She traveled to Europe in the 1950s with the touring production of “Porgy and Bess,” and she also released an album in 1957 titled, “Calypso Lady.”

Although Angelou never attended college, the poet extraordinaire had 30 honorary degrees bestowed upon her and she also taught at Wake Forest University.

In addition to I Know Why the Caged Bird Sings, Angelou also wrote several other autobiographies, including, Gather Together in My Name in 1974, Singin’ and Swingin’ and Gettin’ Merry Like Christmas in 1976, The Heart of a Woman in 1981, All God’s Children Need Traveling Shoes in 1986, A Song Flung Up to Heaven in 2002, and Mom & Me in 2013.