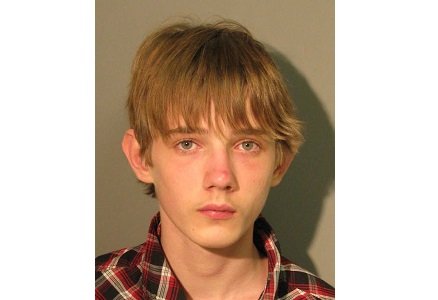 Sash Alexander Nemphos, 16, is being charged as an adult. Baltimore County Police

(CNN) — A weekend investigation into car break-ins in a Baltimore suburb may have headed off a 10th-grader's planned school attack, police said Monday.

Police arrested Sash Alexander Nemphos, 16, after he told police he planned to take a gun to his Baltimore County school and "kill people" according to a release. Police said he took the gun to school on Friday but decided to wait until Monday to carry out his plan. Nemphos is being charged as an adult on several charges including theft and handgun possession.

Late Saturday afternoon, Baltimore County Police Department officers responded to a call from Cockeysville, about 20 miles north of Baltimore, where someone had broken into at least three vehicles.

"Officers identified a 16-year-old boy as the suspect responsible for the thefts from auto," a news release states. "When the boy was located and interviewed at his home in the Monkton area, officers learned that he had plans to go to Baltimore County Public Schools' George Washington Carver Center for Arts and Technology with two explosive devices and a gun, and that he wanted to kill people."

The teen showed officers a handgun and "devices believed to be explosive," prompting officers to call in the county's hazardous devices team, police said.

The devices, which were made of "readily available components," were rendered safe, and police also found tools and components that could be used to make more devices.

"The boy was sent for an emergency evaluation," the police statement said. "He has been charged as a juvenile with several counts including possession of a destructive device, theft and a handgun violation."

Police Chief Jim Johnson praised the first responding officer for "an exceptional job of police work" and said the officer intervened in what could have been a dangerous situation.

It does not appear the teen had any co-conspirators, police said.

County police and Baltimore County Public Schools are cooperating in the ongoing investigation.