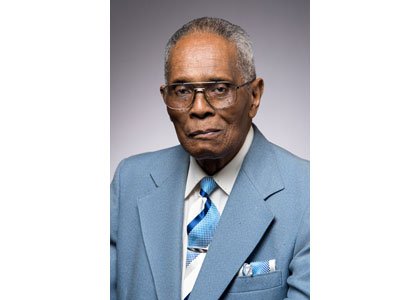 WWII veteran Clarence Hunt fought in the Battle of Normandy.

The telephone rings as often as the doorbell at Clarence Hunt’s Baltimore home, particularly on Veterans Day.

Be it friends, family members or a recently made acquaintance, they all want the decorated and retired Army sergeant to recall what it was like to be a part of what has become known as the Greatest Generation and one of the world’s biggest conflicts.

“To sum it up, I served six years in the Army. I earned three battle stars, some medals for good conduct, the American Defense Service Medal, the Theater Medal, the European/African/Middle Eastern Ribbon, and a World War II Victory Medal,” Hunt said. “But, mostly, I tell all those who call on me that I thank God always for keeping me safe.”

Born in Petersburg, Virginia in 1920, Hunt worked at a Navy Yard near Norfolk when he received a letter notifying him that he had been drafted.

“I wasn’t surprised at all because the Japanese had bombed Pearl Harbor and I knew that they were going to be bringing a lot of us young people in, so I expected to be drafted,” he said.

Hunt, now 94, remembers well the faithful and historic day in which a swarm of Japanese dive bombers appeared over the otherwise peaceful Hawaiian skies and unleashed a vicious attack on U.S. battleships, killing and wounding more than 3,600 Americans. The attack forced the United States into World War II.

“I was put on the front lines. I was with General George S. Patton,” he said.

Hunt was originally assigned to the 25th Infantry Division and eventually he landed overseas and participated in the Normandy invasion that began on June 6, 1944.

“It took 11 days to cross the Atlantic Ocean and there was nothing to see but sky and water,” he said. “We had trained for almost a year and when we landed in France; our landing barge couldn’t make it to the beach. We were in water that was waist high and our captain said, ‘This is it.’”

For Hunt and the thousands of others on the beach, the war became as real as anyone could have imagined. He says that German troops opened fire on his unit and he witnessed death, dismemberment and outright destruction.

“There were bodies everywhere and it was chaos,” he said. “I saw so much, but it was war and we had to keep moving and keep up with the initiative.”

“We went all the way to Berlin and the Russians were coming from the other direction and there were so many planes that they seemed to cover the sky,” Hunt said. “We almost didn’t make it.”

Fortunately, Hunt did make it. He says he remembers sleeping in a duffle bag under a truck on a cold, hardened ground, which has resulted in the arthritis he suffers with today.

During the war, Hunt suffered injuries to his face and one of his legs. His injuries were life-threatening and he had to be hospitalized for two weeks before being shipped back home, he said.

Things, of course, are a lot quieter in Baltimore where Hunt said, at 94, he’s as healthy as can be.

“My doctor tells me I’m in good health and most people tell me that I look swell for my age,” he said.

While he has spent many a Veteran’s Day visiting comrades at the V.A. Hospital, this year Hunt says he doesn’t have any specific plans.

“I used to go to the parades and visit other folks, but I may be home this year,” he said. “But, I’m sure I’ll get a call and someone will ask me about the war.”