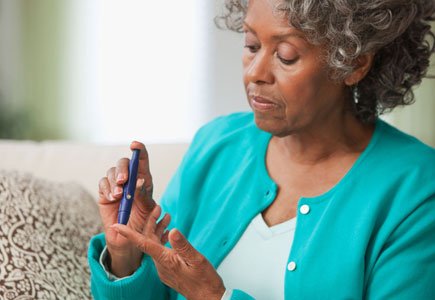 Blacks are 1.7 times more likely to have diabetes than non-Hispanic whites and African-Americans are significantly more likely to suffer from blindness, kidney disease and amputations. (Courtesy Photo/www.themedicalblog.net)

More and more Baltimore area residents are increasingly feeling the effects of diabetes as thousands suffer from the disease, and a significant number of others have the life-threatening illness but don’t know it.

Health officials estimate that one out of every three children born after the year 2000 in the United States will be affected by diabetes, a long-term condition that causes high blood sugar levels.

November is Diabetes Awareness Month and The American Diabetes Association is launching their “America Gets Cooking to Stop Diabetes” campaign that aims to challenge Americans to live a healthier lifestyle through through diet and exercise.

The campaign, which will use social media and other forums to share healthy cooking tips and recipes has been designed to educate the public in cooking and preparing nutritious and tasty food while encouraging everyone to become more active.

“The [campaign] will provide people with healthy ideas they can put into action so we can move closer to stopping diabetes,” said Marjorie Cypress, the president of Health Care & Education at the American Diabetes Association.

The “America Gets Cooking to Stop Diabetes” program has already served to invigorate some individuals like Thelma Hicks, 51, an African-American with the illness.

“When you talk about the need for eating properly, exercising and finding out what you can do to stay well and not jeopardize your life, you listen.” Hicks said.

Nearly 30 million adults and children in the United States have diabetes, based on information from by the American Diabetes Association and another 86 million Americans have pre-diabetes and are at risk for developing type 2 diabetes, according to association officials.

Health care providers define pre-diabetes as having a blood sugar— or glucose— level higher than it should be, but less than diabetics have.

With type 2 diabetes, the most common form of the illness, the body does not use insulin properly. Children and young adults are usually diagnosed with type 1diabetes, a condition where the body fails to produce insulin.

“It’s not fun at all,” said Arleta Wilkins, who is among a growing number of African-Americans living with the disease.

Afrezza, a new drug to treat the disease, is an insulin powder designed to be inhaled at the start of a meal. Executives from the drug’s maker, MannKind, have said that patients using the drug can achieve peak insulin levels within 12 to 15 minutes. That compares to a wait time of an hour and a half or more after patients inject insulin.

However, FDA officials caution that Afrezza is not a substitute for long-acting insulin, but it’s a new option for controlling insulin levels during meals.

The agency approved Afrezza with a boxed warning— the strongest type— indicating that the drug should not be used in patients with chronic lung diseases, such as asthma and smoker’s cough, due to reports of breathing spasms.