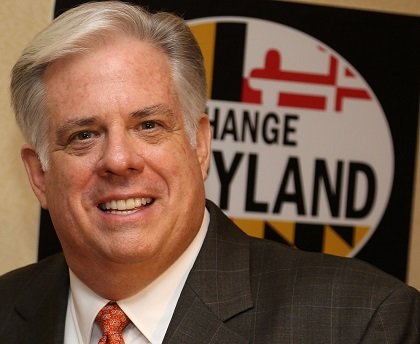 On a night that many thought would see history with the election of Anthony Brown as Maryland's first African-American governor, Larry Hogan pulled of a historic upset, which punctuated a bloodletting of Democrats around the country at the hands of the GOP.

"[New Jersey Governor] Chris Christie called and offered to take his private plane here but I told him that I didn't want to keep you waiting," Hogan told a crowd of supporters celebrating his shocking victory, one that enabled him to become only the second Republican to govern Maryland in more than 40 years.

With 87 percent of the precincts reporting, The Associated Press had Hogan leading the race 52 percent to 46 percent. Politico, the political watchdog publication, reported that the sagging popularity of incumbent Democratic Governor Martin O'Malley helped propel Hogan to victory.

Brown, many observers said, appeared to take for granted that he was a shoo-in.

However, Hogan continually slammed the lieutenant governor for the state's flagging economic performance and "40 tax hikes passed during the O'Malley administration."

Republicans were victorious around the country on Tuesday, gaining control of the Senate and reducing President Barack Obama to lame duck status for his final two years in office.

If there was one race that Democrats and political watchers everywhere thought was in the bag, it was the race for Maryland's governor. Brown easily beat Attorney General Doug Gansler and state Delegate Heather Mizeur in the Democratic primary, winning by 27 points. His campaign spending increased dramatically, and his party took aim at Hogan's opposition to a restrictive gun-control law and alleged that Hogan would roll back abortion rights in the state, Politico reported.

Despite the loss, many still concede that Maryland remains a Democratic stronghold.

"I think the people wanted change," said Adam Dubitsky, Hogan's campaign spokesman. "It's not a realignment. It's not turning a blue state red. It's people who are tired of the last eight years."