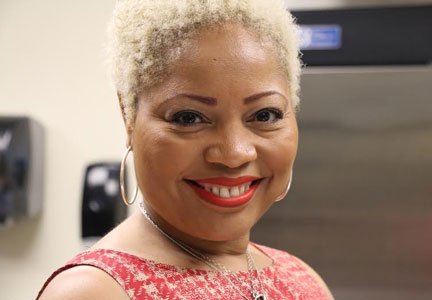 Tondria Simon-Johnson, 49, is a kidney transplant recipient and chef who will participate in the 2014 Santé: A Culinary Odyssey on Thursday, November 20, 2014 at M&T Bank Stadium. Proceeds from the event will fund the National Kidney Foun-dation of Maryland's patient emergency assistance program and support kidney disease research at Johns Hopkins and the University of Maryland. For more information about Santé or to purchase tickets, visit www.santebaltimore.com or call 410-494-8545.

BALTIMORE — On Thursday, November 20, 2014, the National Kidney Foundation of Maryland (NKF-MD) will present the 2014 Santé: A Culinary Odyssey at M&T Bank Stadium in Baltimore from 6 p.m. to 10 p.m. Signature dishes prepared by over local 45 chefs will be featured at the event and proceeds will fund kidney disease research and directly support NKF-MD’s patient emergency assistance program.

Tondria Simon-Johnson is the owner of Celestial Catering featuring Sweet Treats by Tondria prepares sweet treats at Mt. Calvary AME Church in Towson, where she currently uses kitchen space for her catering company.

According to NKF-MD, over 60 percent of Maryland dialysis patients are African-American and on average day, 2,200 Marylanders reportedly await a kidney for transplantation.

Tondria Simon-Johnson, a 49-year-old Baltimore resident and owner of Celestial Catering featuring Sweet Treats by Tondria, understands the value of detecting kidney disease through early screening firsthand. She celebrated her five-year kidney transplant on October 26, 2014. When Sharon Bunch, a member of Santé’s restaurant recruiting committee, asked if Simon-Johnson would be interested in participating, Bunch was unaware that the chef was a kidney transplant recipient.

In 1997, the mother of two experienced renal failure after delivering her youngest son, Therone Johnson, Jr. During a six-week postpartum checkup, Simon-Johnson’s doctor referred her to the nephrologist who evaluated her 10 years prior.

“I didn’t really have anything that was being watched or addressed, but I do recall at the age of 20 that I was sent to a nephrologist for protein spillage. My creatinine was starting to increase, but for the next 10 years, until I got pregnant, there was nothing doctors were concerned about. It was just a condition that I had,” Simon-Johnson said.

In 2007, she started peritoneal dialysis. For two and a half years, Simon-Johnson completed eight-hour nightly treatments at home. Once a month she went to a facility for blood work and medications. Simon-Johnson, who is also a salon owner, continued to work as a cosmetologist. Her clients and other stylists were unaware of her health challenge, until she could not work at Celestial Beauty Center, while recovering from a kidney transplant in 2009.

“The nephrologist told me my creatinine was increasing. Once it approached a certain level, I knew that I would need a kidney transplant,” Simon-Johnson said.

Transplants performed with a living family member’s donated kidney can decrease the risk of kidney rejection. However, Simon-Johnson’s mother, Lucy Simon, was unable to donate a kidney because she had knee replacement surgery. One of Simon-Johnson’s cousins was identified as a perfect match, until health testing revealed that she was at risk for kidney failure. Simon-Johnson was added to a kidney transplant waiting list. Her donor was a male who had a fatal stroke.

“If my donor or family would not have said ‘yes,’ I may not be here today,” Simon-Johnson said.

Since receiving her kidney transplant, Simon-Johnson says that she had been fairly healthy. The entrepreneur is living her dream to cook and lives with no regrets. Her late grandmother, Thelma Thorpe, inspired her culinary passion that has turned into a second career. Simon-Johnson also completed a certificate in cooking and baking from

Baltimore International College. She is currently a few credits away from earning a culinary arts degree from Arundel Community College.

For more information about Santé, and to purchase tickets, visit www.santebaltimore.com or call 410-494-8545.