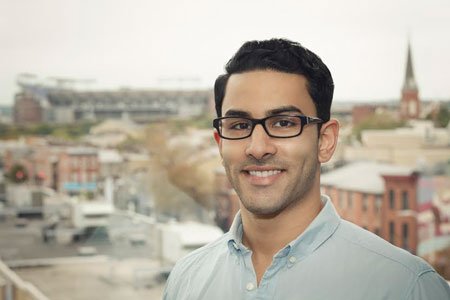 Saad Alam is CEO of Citelighter.

BALTIMORE — At the age of 28, Saad Alam approached his friend Lee Jokl and shared his idea for a new business. Alam had a family member who was struggling with writing research papers. The relative was even contemplating dropping out of college. The situation inspired Saad to start an education technology company that would offer students a comprehensive research and writing platform. Alam left his lucrative job, while Jokl also left his job to pursue the ambitious business venture.

Today, Citelighter, a company the young men started in 2011 with funds raised from an innovative Kickstarter campaign, is being used in nearly 3,000 schools in over 50 countries. Citelighter provides students with writing tools and gives teachers and administrators the ability to assign, monitor, and improve students’ work.

“Citelighter makes the writing process easy for teachers and administrators so they can help students cultivate their ideas and communicate them on paper with purpose,” said Alam who is CEO of the company. “By using the writing platform, students as early as elementary school, are writing at advanced levels.”

He added, “For teachers, Citelighter gives them the ability to assign, monitor and grade every student’s work. And for administrators, it saves time and money, because instead of paying for the use of several technology resources, Citelighter combines most— if not all— capabilities onto one platform.”

The Citelighter platform is available on its official website as a free set of student tools or premium teacher and administrator service. At Norwood Elementary School in Dundalk, Citelighter is being used to teach third grade students how to write academic level research papers. Pat Goldys is principal of Norwood Elementary.

“I have nine-year-old students in third grade doing research papers,” said Goldys. “Who says these young kids can’t do this? Not Norwood. We say they can!”

Darrielle Sarnovsky is a teacher at Norwood Elementary.

“They just really took leadership with it, and that was awesome,” said Sarnovsky. “That’s exactly what we want in our classrooms. Citelighter changed everything for them.”

“It helps me to make sure I stay on task,” said one student. “I think I am a good writer now, because I am better at organizing than I was before,” said another.

According to Alam, who is now 31, Citelighter also accelerates students’ ability to perform in accordance with Common Core Standards by breaking down writing concepts into manageable pieces.

“Citelighter allows students to think about each component individually and then assemble them together to see how they can create a much larger picture,” he said.

The Common Core is a set of high-quality academic standards in mathematics and English language arts/literacy (ELA). These learning goals outline what a student should know and be able to do at the end of each grade. The standards were originally adopted by 46 states and the District of Columbia. Common Core supporters say it sets high standards in education.

However, Common Core opponents argue they should be replaced with locally written versions, while other critics feel the standardized tests and the high stakes associated with them, including teacher performance reviews are unfair.