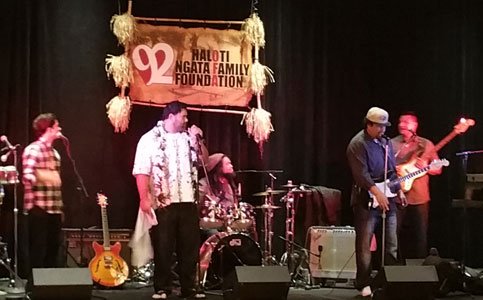 There was both a live and silent auction with numerous memorabilia items from the Baltimore Ravens and the Baltimore Orioles. Fans were able to purchase a tour of the Ravens practice facility, game worn jerseys and various autographed items. The evening was filled with Polynesian food, mixed drinks and music. Highlights included performances by Polynesian dancers along with an amazing fire show in which a fire juggler wowed the crowd.

Haloti Ngata performed two dances as he shared his culture with those in attendance. The luau originated with Edwin Mulitalo, a member of the Super Bowl XXXV Ravens team in 2000. Mulitalo and Ngata played one season together in 2006, Ngata's rookie year. Ngata was all smiles as he explained what the reason behind the event.

"It's a luau to gather people together and raise some money to help the community. I want to share my culture with people and raise money at the same time," Ngata said. "It's to share what I have been blessed with. Family is number one to me but giving back is up there too as well. Giving back with a lot of love which is on the logo, the word 'Ofa’ which means love and that's also my mother's name. We use that as one of our mottos, our mission to give back with a lot of love. To appreciate everything that I've been given and give back, to do what me and my wife can."

The opportunity to give people a look into his culture means a lot to Ngata.

"It's huge. Here in the east coast, a lot of people don't know too many Polynesian people, so they haven't been exposed to the culture. To come out here and get to do this is amazing," Ngata said. “Both of my parents immigrated from Tonga to America so it's awesome to be able to share some of what they've kind of gone through and make them proud at the same time."