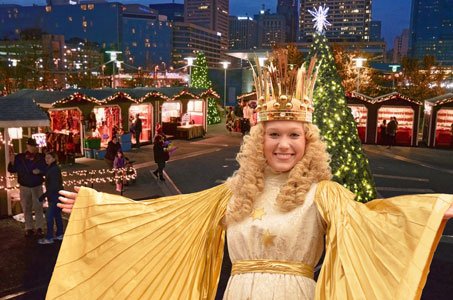 On Sunday, November 30, 2014, the Christkind will sail along the waterfront from Harbor East to Harbor Place on a decorated water taxi with holiday music playing at 2:15 p.m. to meet Santa Claus who will accompany her to Christmas Village’s outdoor area. The opening ceremony starts at 3 p.m. Running until December 24, the Christmas Village brings the true spirit of Christmas to Baltimore. Courtesy Photo/Christmas Village in Baltimore)

BALTIMORE — Christmas Village in Baltimore sails back to West Shore Park with its Grand Opening Ceremony on Sunday, November 30, 2014. The ceremony will feature an official visit from the Christkind (the traditional Christmas Angel and bringer of gifts) from Nuremberg, Germany, a traditional prologue, a meet and greet with the Christkind and Santa and an official Christmas tree lighting with Mayor Stephanie Rawlings Blake.

The Christkind (pronounced Kristkint) is a fairy-like being, dressed in a gold and white robe with a crown atop her golden locks. In Germany and other countries throughout the world, the Christkind is the person who brings the Christmas gifts to children. Christmas Village in Baltimore officially partners with the city of Nuremberg, Germany to bring the famous figurehead of the Nuremberg Christkind to Baltimore.

A panel of judges and the people of Nuremburg elected the Christkind who will be visiting Baltimore this year. Every two years, a new Christkind is anointed as the “official” Christkind worldwide. She undertakes the huge responsibility of representing the Nuremburg Christmas Market, one of the largest markets of its kind in the world, and taking part in charitable events.

At 2:15 p.m., the Christkind will sail along the waterfront on a decorated water taxi with holiday music playing, from Harbor East to Harborplace, where she will then meet Santa and he will accompany her to Christmas Village’s outdoor area. The opening ceremony starts at 3 p.m. City representatives, Christmas Village’s president Thomas Bauer, Visit Baltimore’s President Tom Noonan and Waterfront Partnership’s Sarah St. Clair will make brief remarks and at 3:20 p.m., the Christkind will officially open the market with her traditional prologue, accompanied by the Hereford High School Choir.

After the opening ceremony, the Christkind will walk around Christmas Village with a basket full of candy greeting guests of all ages. Guests will have an opportunity to take photographs with the Christkind while listening to a beautiful performance by the Hereford High School Choir. Then, at 4:30 p.m., the Christkind will meet Mayor Stephanie Rawlings-Blake on stage for the official lighting of the majestic 21-foot Christmas tree placed in the center of the market. A brass ensemble of the Baltimore Youth Symphony Orchestra will accompany the tree lighting.

Running until December 24, 2014, the Christmas Village brings the true spirit of Christmas to Baltimore. With beautiful outdoor wooden booths that harbor fifteen vendors in the outdoor area, Christmas Village creates the feeling of a true German Christmas Market. Inside the 180 x 60 foot heated festival tent, forty vendors will sell special holiday gifts, ornaments, jewelry and high quality arts and crafts from all over the world. Christmas Village’s unique atmosphere with the backdrop of an ancient German town in the tent, great Christmas lights and decorations, and the delicious smell of treats such as Bratwurst, Lebkuchen (gingerbread), pretzels, mulled wine, German beer from the Bavarian Beer Garden and beverages, will put the whole family in the perfect Christmas mood.

New attractions added to this year’s market offer an even more authentic German Christmas Market experience for all visitors. An Advent Wreath will be situated in front of the entrance to the heated tent and one candle will be lit each Sunday to count down the final four weeks until Christmas arrives. Beginning December 1st, one of the twenty-four doors will be opened every day on a German style Advent Calendar and it will reveal surprises for visitors of Christmas Village. Little visitors can also enjoy a train ride on the new Christmas Village Express and have the opportunity to send letters to the actual Christkind Post Office in Engelskirchen, Germany.

For more information about Christmas Village in Baltimore, visit: www.baltimore-christmas.com.