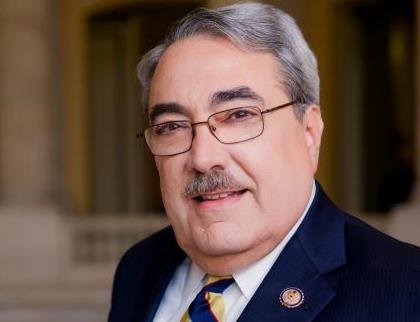 After his unanimous selection as the next chairman of the Congressional Black Caucus, North Carolina Democratic Congressman G.K. Butterfield said he’s grateful to all in the caucus, including outgoing chair Marcia Fudge (D-Ohio).

“I’m moved by the unwavering support the Congressional Black Caucus (CBC) has shown me throughout the years,” said Butterfield, who will take over as chair in January.

“Each year they’ve continued to elect me to senior positions within the caucus, solidifying their confidence in me to help steer and now lead the conscience of the Congress as chair. I do not take this endorsement lightly.”

Butterfield, whom officials say has a long history of civil rights activism under his belt, previously served eight years in leadership positions within the caucus.

“The new Congress provides a fresh start to address the issues that are important to us all,” said Butterfield, 67. “Members of the CBC come from every region of the country. While we each have our own priorities, we speak with a singular, powerful voice in our fight to deliver on the expectations of Americans, which is to have a government that works for us all.”

Butterfield said his roots growing up in Wilson, North Carolina taught him the values of hard work and responsibility. His father, Dr. G. K. Butterfield Sr., a respected dentist and elected official, graduated from Meharry Dental College and practiced dentistry for 50 years in the poor and segregated community of East Wilson.

Many of his father’s patients had never received dental services because they were unable to afford care. However, Dr. Butterfield did not turn anyone away because of their inability to pay. His son said the elder Butterfield considered it his duty to care for the poor and not burden them with expenses they could not afford.

Butterfield says his mother, Addie, loved education. She taught elementary school for 48 years in some of the poorest communities in North Carolina and she focused on making sure that all of her students learned to read, a right that had been denied to many blacks in the South.

After graduating from Charles H. Darden High School in Wilson, Butterfield earned a bachelor of arts in Political Science and Sociology from North Carolina Central University (NCCU), where he helped to organize voter registration drives in Durham.

After the enactment of the Voting Rights Act in 1965, Butterfield organized a student march from the State Capitol in Raleigh to the Wilson County Courthouse to dramatize the importance of voter registration.

At the conclusion of the march, he registered to vote for the first time.

Butterfield also received a juris doctor degree from the NCCU School of Law and he served in the United States Army from 1968 to 1970.

After completing law school, Butterfield began a career as a civil rights attorney and his litigation work helped to preserve the ability of several African-American communities to elect candidates of their choice to public office, according to his official biography.

Butterfield won election as Resident Superior Court Judge for the First Judicial Division and for 12 years, he presided over civil and criminal courts in 46 counties throughout North Carolina.

In 2004, he won election to the House of Representatives and, in 2007, Butterfield snagged an appointment from Speaker Nancy Pelosi and Majority Whip Jim Clyburn to serve as one of eight chief deputy whips whose responsibilities are to assist in the formulation of Democratic policy and to ensure the passage of legislation by maintaining a high-level of communication with party members.

“I am happy to pass the chairman’s gavel to my friend and colleague, Rep. Butterfield,” said Fudge, 62. “He has dedicated his life and career to advancing the priorities of the disenfranchised and overlooked, both in his home state of North Carolina as well as here on the Hill. Rep. Butterfield’s service and leadership, while a member of the CBC, have been critical to a number of key successes for the Caucus. I congratulate him on his election, and I look forward to supporting him in this new capacity as he continues to move our Caucus forward.”