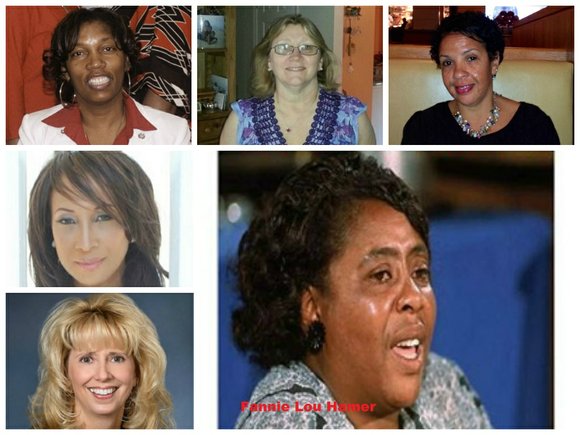 ANNAPOLIS — The 19th annual Fannie Lou Hamer Awards Reception will be held on Sunday, October 5, 2014 in the Frances Scott Key Auditorium at St. John’s College located at 60 College Avenue in Annapolis from 4 p.m. to 6 p.m.

Tax-deductible tickets for the event are $35, which includes the awards ceremony and a reception with light fare. For tickets, call: 301-538-6353. Information at https://www.facebook.com/FootSoldiersMemorial

The Fannie Lou Hamer Awards recognizes women from various racial backgrounds who have excelled in their chosen field. Anne Arundel County is the only jurisdiction in the State of Maryland to recognize the birthday of Fannie Lou Hamer by hosting a tribute to her. The Fannie Lou Hamer awards are designed to honor women, who may not be household names, but like the late Mrs. Hamer worked diligently to improve civil and human rights in their community. Each year, a committee consisting of members of the community reviews the names of women who either live and or work in Anne Arundel County. Six women are chosen from the names that are submitted.

Pat Richardson of Annapolis, the publisher of the Capital-Gazette newspapers. Richardson was chosen because her publication has partnered with the Dr. Martin Luther King, Jr. Committee, Inc., in helping to create the award winning Civil Rights Foot Soldiers Memorial in 2013, which recognizes participants in the 1963 March on Washington. Her newspapers also partnered with the Martin Luther King Committee to create the first and only Dr. Martin Luther King, Jr. Memorial in the state of Maryland located at Anne Arundel Community College.

Rhonda L. Johnson, of Gambrills, president, of the Delta Sigma Theta Sorority, North Arundel County Alumnae was selected because of the work she has done in promoting voter registration and voter education. Like the late Mrs. Hamer, she has sought to empower the community by encouraging citizens to participate in the electoral process.

Tracey Parker Warren, Esq., of Severn, is a lawyer that has served on the Anne Arundel County Commission on Women and the Human Relations Commission. Currently a member of the Dr. Martin Luther King, Jr. Committee, Warren helped to spearhead the successful campaign to create the Civil Rights Foot Soldiers Memorial.

Tryphenia Ellis Johnson, of Severn, was selected to receive the 2014 Fannie Lou Hamer Award because of her involvement with the Anne Arundel County branch of the National Association for the Advancement of Colored People (NAACP). In addition to supporting voter registration and voter education programs for the NAACP, she has worked with juveniles educating them on the criminal justice system.

Constance “Connie” West of Millersville was selected to receive the Fannie Lou Hamer Award because of her efforts at mentoring youth as well as being an active Foster Parent. She is a retired educator, who has decided to adopt children who are in need of parents.