Rosa Parks’ papers to reside at Library of Congress 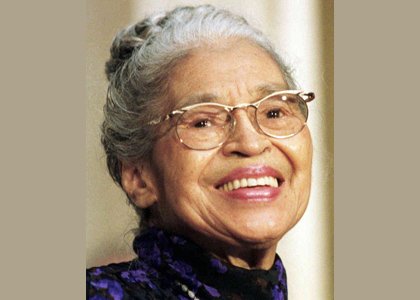 The Library of Congress will be the new home of the Rosa Parks Collection, Librarian of Congress James H. Billington announced on Tuesday, September 9, 2014. The collection will be at the Library on a 10-year loan from the Howard G. Buffett Foundation.

The collection comprises approximately 1,500 items including personal correspondence and photographs, autobiographical notes, letters from presidents, her Presidential Medal of Freedom and Congressional Gold Medal, additional honors and awards, clothing and furniture, and 200 drawings by schoolchildren and hundreds of greeting cards from individuals thanking her for her inspirational role in the civil rights movement.

Items from the collection will be incorporated in spring of 2015 into the new exhibition “The Civil Rights Act of 1964: A Long Struggle for Freedom,” which opened on September 10, 2014. In addition, the Library will digitize the documents and visual materials and make them widely available through its website.

“Rosa Parks is an iconic figure in the American civil rights movement, the very definition of the quiet power of an individual to inspire action in others,” Billington said. “This collection joins our unparalleled holdings of African-American materials in a public institution.”

Howard G. Buffett, chairman and CEO of the Howard G. Buffett Foundation, said, “My goal was always to ensure this historic collection would be made available for the public’s benefit so that as many people as possible can learn about Rosa Parks and the sacrifices she made to support the civil rights movement. I believe that partnering with the Library of Congress to display these items in our nation’s capital is the best way to achieve that goal.”

Library of Congress as the papers of Thurgood Marshall; A. Philip Randolph; Bayard Rustin; Roy Wilkins; and the records of both the NAACP and the National Urban League. The collection becomes part of the larger story of our nation, available alongside the presidential papers of George Washington, Thomas Jefferson, and Abraham Lincoln, and the papers of many others who fought for equality, including Susan B. Anthony and Patsy Mink.

Parks’ refusal to give up her seat on a Montgomery, Alabama, bus to a white passenger on December 1, 1955 led to the Montgomery Bus Boycott, a seminal event in the U.S. civil rights movement.

"The Civil Rights Act of 1964: A Long Struggle for Freedom" opens September 10 and closes on September 12, 2015. Located in the Southwest Gallery on the second level of the Library’s Thomas Jefferson Building, 10 First St. S.E., Washington, D.C., the year- long exhibition will be free and open to the public Monday through Saturday, 8:30 a.m. to 4:30 p.m.

The Library of Congress, the nation’s oldest federal cultural institution and the largest library in the world, holds more than 158 million items in various languages, disciplines and formats. The Library serves the U.S. Congress and the nation both on-site in its reading rooms on Capitol Hill and through its award-winning website at www.loc.gov.