Could Competitive Spelling ‘Bee’ Right for Your Child? 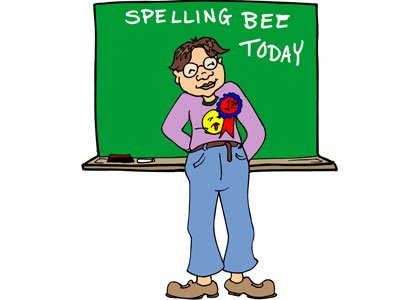 What do the words— narcolepsy, psoriasis, eczema, albumen and sanitarium have in common? You would be correct if you said each is a medical expression. But, there is another, more noteworthy connection these terms share. They are all words that won first place at the National Spelling Bee, an annual competition to find the grade-school student who could correctly spell the most words.

In the middle of the roaring twenties nine newspapers joined together to establish the National Spelling Bee. This popular test of brains over brawn will celebrate its 90th anniversary in 2015. The winning words have a wide range of difficulty from a common, relatively easy spelled term like “therapy” to the obscure, polysyllabic “esquamulose” which means “not having tiny scales of the type that make up the covering of fish, reptiles, and some mammals” and “smaragdine” an adjective describing a person, place or thing emerald green in color.

Participants have the option of asking the moderator to use a word in a sentence. In addition to giving the student a few extra seconds to think, it puts the term into proper context and helps contestant to avoid spelling a similar sounding word. Here is a “tongue-in-cheek” sentence composed of winning words: Vanessa was so proud of her exotic fish collection she spent time in a sanitarium receiving therapy after discovering all her smaragdine esquamulose pets floating belly up.

Ironically the word “bee” when used to describe a spelling contest is “one of those language puzzles that has never been satisfactorily accounted for,” according to the E.W. Scripps Company, the tournament’s national sponsor. Though the exact origins are unknown, bee is “a fairly old and widely-used word, it refers to a community social gathering at which friends and neighbors join together in a single activity (sewing, quilting, barn raising, etc.) usually to help one person or family.”

Scripps claims the title of “the nation's largest and longest-running educational promotion, administered on a not-for-profit basis.” Their purpose is to help students improve their spelling, increase their vocabularies, learn concepts and develop correct English usage that will help them all their lives. They sponsor local spelling bee sponsors in the United States, American Samoa, Guam, Puerto Rico, the U.S. Virgin Islands, and

Department of Defense Schools in Europe; as well as the Bahamas, Canada, China, Ghana, Jamaica, Japan and South Korea.

Over the years the Spelling Bee has evolved into a major league competition. ESPN’s live broadcast of the tournament finals is quite popular. Here are a few tips for parents and students to spark an interest in spelling. At the very least these ideas can help students become more proficient spellers.

•Watch “Akeelah and the Bee.” It’s a great, inspirational movie. Also recommended is the documentary “Spellbound.”

•Keep a "great words" journal for every new and interesting word that you find.

•Designate a spelling wall in your home. Post, new words to the wall each day.

•For family game night, use a newspaper for a current events bee or a cookbook for a cuisine bee.