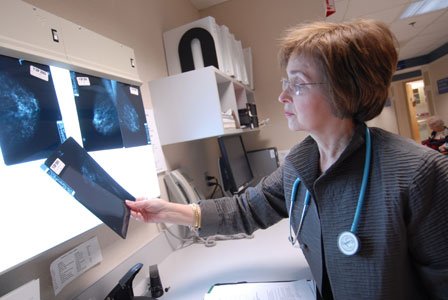 Dr. Diana Griffiths has been leading Saint Agnes' Comprehensive Breast Center for more than fifteen years. She has special expertise in medical oncology and the development of unique treatment plans tailored specifically to each patient. (Courtesy Photo)

BALTIMORE — This is Part I of a three-part series about St. Agnes Hospital’s efforts to fight breast cancer. The series will also look at the hospital’s new "One Journey, Many Paths" campaign; one woman’s breast cancer battle; and early detection tips.

Dr. Diana Griffiths is the Medical Director of the Comprehensive Breast Center at Saint Agnes Hospital.

She added, “I haven’t met a women yet who wasn’t glad she got a mammogram, and the breast cancer was caught early. It breaks my heart when a woman comes in who waited to be treated. In such cases, the prognosis may be poor because a woman felt a lump, but didn’t do anything about it.”

Located at 900 Caton Avenue, Saint Agnes is one of the first 135 hospitals in the U.S. to be fully accredited by the National Accreditation Program of Breast Centers (NAPBC).

“It is hugely important to educate women about their diagnosis,” said Dr. Griffiths. “That is why early detection and treatment are so important. Some women think they are going to die shortly, when in fact when they have a favorable diagnosis. However, others may have more a serious condition, and need treatment sooner rather than later.”

Dr. Griffiths brought a multi-disciplinary team approach to Saint Agnes Hospital. Physicians from multiple specialties come together to develop the most effective and comprehensive treatment plan for each patient.

“Years ago, the treatment of breast cancer was purely surgical,” said Dr. Griffiths. “It became clear that it wasn’t a one specialty disease. About 20 of us came together and came up with a multi-pronged approach to treating women with breast cancer.”

She added, “The patient is seen by a team of physicians who will play a role in their treatment. The team includes a plastic surgeon, and a medical oncologist who all review everything from each patient and from our perspective, how we can best treat the woman.”

Dr. Griffiths has special expertise in medical oncology, unique treatment plans and various treatment options including chemotherapy (a cancer treatment that uses drugs to destroy cancer cells; neo-adjuvant therapy (given after primary therapy to increase the chance of long-term survival), mastectomies (a surgery to remove a breast or part of a breast) and lumpectomies (surgery to remove cancer or other abnormal tissue from the breast).

“Prior to the 1970s, mastectomies were done and we hoped for the best,” she said. “But there were women whose cancer came back in other parts of the body. In the 1960s, chemotherapy was introduced, and since that time, an explosion of things has gone on. We have developed better ways of screening breast cancer.”

She added, “We are finding it earlier, and treating it at earlier stages. As a result, it has approved our ability to treat women. We have also developed radiation techniques, and doing fewer surgeries.”

“Breast cancer is treatable,” she said. “Women need to check their breast. They should be experts in what their own breast feels like. There are also occasions when a woman feels a lump and a mammogram does not show anything. Some cancers can do that. These women need to see a surgeon to evaluate it further.”

She added, “I hate to see women who neglected to examine their breast or failed to get a mammogram who would have had a much better prognosis if they had gotten treatment earlier. I want women to be empowered so they can live longer, healthier lives.”