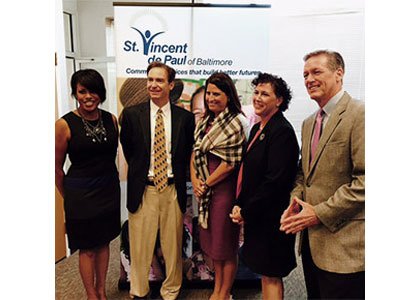 BALTIMORE — Toni Boulware won’t stop until the approximately 1,000 homeless families in Baltimore have a comfortable place to live.

The director of the St. Vincent de Paul of Baltimore’s Front Door Program, Boulware has been working with the homeless population for 15 years and she envisions a time when no one will go without adequate shelter and all Charm City residents will enjoy the confines of their own four walls.

“I’ve been at St. Vincent for nearly two years now, but I’ve always been a person that’s been inspired by helping others,” Boulware said. “I’m definitely a human services worker and I’m dedicated and passionate about helping people to make a change.”

Part of that change is the newly expanded Front Door Program, a rapid re-housing program for local homeless families, which continues to receive financial and other assistance from the city of Baltimore, the United Way of Central Maryland and the Harry and Jeanette Weinberg Foundation which last month issued a $1.5 million grant to St. Vincent de Paul for the re-housing program.

The program works with a number of shelters in Baltimore and it also serves families who aren’t currently in city shelters. It also assists mothers with older teenage boys and single fathers with children.

“We’ve received additional partners to help expand the program. In previous years, we were able to assist just 24 to 26 families whereas now we are able to service 200 families in the next three years,” Boulware said.

The Weinberg grant will also help St. Vincent de Paul to conduct research that Boulware says will contribute to establishing national best practices for reducing family homelessness. She also says the program aligns with the city’s 10-year plan to end homelessness, a plan that recognizes a critical need to support alternative housing models.

Mayor Stephanie Rawlings-Blake, who attended a gathering to announce the program’s expansion, said she’s pleased with what St. Vincent de Paul is accomplishing.

John Schiavone, the president and CEO of St. Vincent de Paul, also attended the September 22 event said he’s thrilled about the expansion of the re-housing program.

“The rapid re-housing model of service recognizes that the best way to address the needs of homeless families and reduce the negative consequences of homelessness is to reduce the amount of time families are homeless,” Schiavone said.

He added that since the St. Vincent de Paul’s Front Door program began in 2009, it has helped to reduce families’ length of stay in shelters by 70 percent.

To help quickly re-house families, St. Vincent de Paul secures market-rate rental units in communities near schools and wherever the homeless family’s existing support system might be. The program provides the initial rent, a security deposit and moving costs and places families with case managers to assist them in achieving self-sufficiency.

Boulware says families in the program have a 92 percent housing retention rate, in part, because the program assists the family head in addressing their barriers to housing. The program also helps to strengthen the health and wellbeing of the family, and build their educational, employment, and financial assets so that they may become quickly

Homeless families represent about one-third of the homeless population— estimated at 3,000 in Baltimore— and families have been the fastest growing segment of the homeless population in recent years, according to statistics compiled by St. Vincent de Paul. Homeless families are also among the most difficult populations to serve because of the many barriers to housing they face, including mental health, substance abuse, domestic violence, unemployment and underemployment.

However, the re-housing and other programs are helping to turn the tide in a positive direction.

“The community is excited about our program and everyone is ecstatic about resolving homelessness,” Boulware said. “We certainly feel that we are meeting expectations and I see this program growing even bigger, expanding, and getting to the point where we can get additional [sponsors] and possibly gain additional partnerships.”