"I'm scared for my life," Lisa Mahone's voice is heard saying in a video 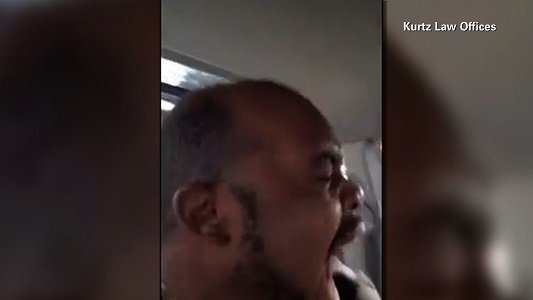 An Indiana couple filed a federal lawsuit against Hammond, Indiana police for an incident caught on camera. Officers are accused of malice and reckless indifference during a traffic stop on September 24, 2014. Hammond Police issued a response to the lawsuit saying the passenger repeatedly refused orders to produce identification and exit the vehicle. The department says the officers "Were at all times acting in the interest of officer safety and in accordance with Indiana law." (Photo from Kurtz Law Office)

(CNN) — An Indiana family is suing a city and the local police after officers allegedly smashed a car window to stun and arrest a passenger during a traffic stop.

The family said police pulled them over because the two front passengers were not wearing a seat belt on September 24 in Hammond, Indiana.

Both sides argued they feared for their safety during the traffic stop, which was videotaped by a teenager in the car.

The video in question

"I'm scared for my life," Lisa Mahone's voice is heard in a video, speaking from the driver's seat of her car. In the passenger seat, her partner, Jamal Jones, talks to officers gathered outside his door. His window is rolled down only a few inches. "I don't know what's going on," he says.

Joseph Ivy, 14, and Janiya Ivy, 7, are in the back seat. One of them holds a camera and is recording the exchange.

"Are you going to open the door?" an officer asks Jones.

"How can you say they are not going to hurt you? People are getting shot by the police!" Mahone says before her voice breaks into screams as an officer smashes the passenger window. Jones joins her screams as his body convulses from the electric shock of the stun gun. Officers then pull him out of the car, handcuff him and take him away.

Fear on both sides

Minutes before the incident, the family was driving to the hospital to visit Mahone's dying mother.

The officers placed spike strips under the car's wheels and approached Mahone.

Mahone "informed the officers that her mother was dying and that (they) were on the way to the hospital to see her before she died," read the complaint. "Rather than issuing Lisa (Mahone) a ticket for failure to wear a seat belt, the officers demanded that Jamal (Jones), the passenger, provide the officers with his identification as well."

But Jones didn't have an identification. He had previously turned over his license for an unrelated citation. "Jamal offered to show the officers the ticket, which had his information on it but the officers refused," read the complaint.

Police however tell a different story.

Jones refused to identify himself and repeatedly ignored requests to step out of the car after officers feared he had a weapon, Hoyda said.

Meanwhile, Mahone was on the phone with a 911 operator requesting to speak to a supervisor.

'Fear for their safety'

Mahone, Jones and the children "were in reasonable fear for their safety," read the complaint. "After a minute or two for no reason, the officers drew their weapons."