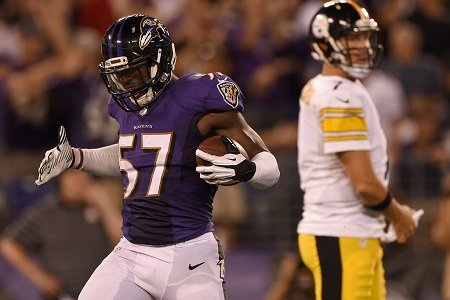 Ravens linebacker C.J. Mosley celebrates after making a tackle for a loss against the Pittsburgh Steelers in week two of the NFL season. (Photo courtesy/BaltimoreRavens.com)

BALTIMORE — The Baltimore Ravens chose linebacker C.J. Mosley with the seventeenth overall selection in the 2014 NFL Draft. The pick was made in an effort to become more athletic on the defensive side of the ball. Ravens General Manager Ozzie Newsome has a penchant for selecting players from the University of Alabama. Inside linebacker was a position that the Ravens needed to fill as they continued to move on after the retirement of the legendary Ray Lewis.

Picking Mosley was an easy decision and it made sense. The speedy, athletic playmaker had achieved first team “All American” status and was looked upon as the top inside linebacker prospect. Lewis had some great things to say about Mosley after the selection was made.

I think this is a great pick for Ozzie Newsome and the Baltimore Ravens,” Lewis said on the ESPN draft broadcast. “Mosley has the instincts to take the defense to the next level. This is a leader at the position of linebacker.”

Those instincts surfaced early in training camp as Mosley was able to make plays all over the field right from the get go. His speed became evident instantly. Mosley gave the secret to being able to play so fast so early in the locker room after the Ravens loss to the Indianapolis Colts.

“It’s all about knowing what you have to do, knowing your job and watching film,” Mosley said. “When you know what you’re doing, you can play fast like that.”

Mosley has become better and better in each game this year. He has ten or more tackles in three of his first five games. Going into week six, he is the team leader with 49 tackles on the season. That puts him on pace for an outstanding 150 tackles as a rookie. So far, his rookie season is similar to a few recent standout rookie years by linebackers, Kiko Alonso, Luke Kuechley and Patrick Willis. Each of these players were said to have played beyond their years as rookies. Their instincts allowed them to flow to the ball faster than other players on their defense. The same can be said about Mosley.

This past game against the Colts was really an example of the do it all ability that he brings to the table. He posted 15 tackles, had one interception and registered a pass break up. Mosley was a force against both the run and the pass. He blitzed the inside gap on a delayed blitz and blasted Andrew Luck while he was throwing the ball, resulting in an interception by Haloti Ngata.

Ray Lewis has taken note of Mosley’s instincts. “When you watch this kid play football, his instinct is what impresses me the most. He’s patient with his feet, he [is] a read it and react guy,” he said.

Those comments mean a lot to Mosley because one of the linebackers that he patterned his game after was none other than Ray Lewis. It clearly shows in the way that they both can diagnose a play and be so disruptive when they get to the ball. The similarities have become evident to one of the veteran players on the team in Lardarius Webb, who paid Mosley the ultimate compliment after the Colts game.