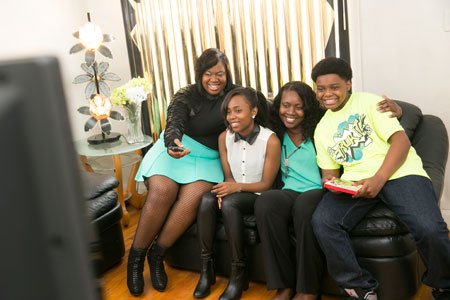 Tammy Owens Johnson with her three children, was diagnosed with breast cancer in 2011 at age 41. Now 45, Owens Johnson has undergone chemotherapy, radiation, surgical removal of both breasts and reconstructive surgery and her breast cancer is in remission. (Courtesy Photo)

This is Part II of a three-part series about St. Agnes Hospital’s efforts to fight breast cancer.

For Tammy Owens Johnson, life was good. The 41-year-old had a good job as a teacher’s assistant in the Baltimore County Public Schools system, did not have any health issues, and was happily raising three children. But one day, Owens Johnson felt a suspicious lump in her breast, and life as she knew it quickly changed.

“I always went to the doctor’s to be checked, because I have always had fibrocystic breasts,” said Owens Johnson, noting a condition in which there is lumpiness in one or both breasts. “But one area kept getting bigger and was sore. That is how I found out I had breast cancer. Going to the doctor when I did was important, because I was already at Stage Three, which was critical.”

According to the National Breast Cancer Foundation, Inc. (NBCF), once a person is determined to have breast cancer, the healthcare team will determine staging to communicate how far the disease has progressed.

NBCF points out that stages are determined by factors which include the size of the tumor within the breast, the number of lymph nodes (small, bean-shaped organs which produce and store blood cells that help fight disease and infection), and whether or not the breast cancer has invaded other organs within the body.

A patient at St. Agnes Hospital, Owens Johnson was diagnosed with breast cancer in 2011.

“My initial reaction was being emotional and scared,” recalled Owens Johnson. “I rarely even caught a cold. I was very healthy, and to go from that to something that serious was mind-blowing. I asked, ‘why me?’”

She added, “My life changed drastically. I was a working, independent mom taking care of everything and everybody and just doing my thing. I worked hard to make sure everyone’s lives, especially my children’s lives, were going well. I never asked anybody for anything, but that stopped when I got sick.”

“My left breast was removed, and then in 2012, they removed my right breast because they found a lump there,” she said. “I had to give up my job because of my chemotherapy treatments, and I am not physically able to do things like I used to do. When you are used to being independent, it’s hard when you find yourself having to depend on others.”