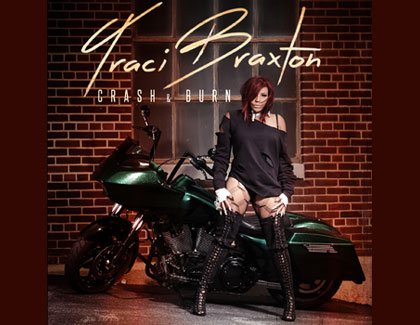 On Monday, October 6, 2014 in the afternoon, the charismatic Traci Braxton stopped by the Baltimore Times office to talk about her solo project “Crash & Burn.”

The reality star of the show “Braxton Family Values,” is excited about finally being able to do something she has always wanted to do—sing!

“I never thought that I would ever get the chance to really have my own CD and just sing, which is what I really wanted to. I [was] singing at my manager’s office and he called me into his office and told me to learn the song I was singing because it was time to stop fooling around and take this seriously,” Braxton said. Hence, we have “Crash & Burn” distributed by Entertainment One, the home of the Indie Artist.

“Crash & Burn” contains the HIT single, “Last Call” and 10 other wonderfully produced tracks. Listeners are in for a treat, especially the over 30 crowd. Braxton has created her sound and identity by taking it back with GREAT love songs and a very adult sound.

Tracks to checkout are: “Perfect Time” (E-One please make this the next single!), “Need It In My Life,” “Passions, Reasons,” and a duet with Raheem DeVaughn, “Stay Sippin."

“I am so excited and I can’t wait for people to really hear me sing and hear what I am about. The producers of my CD, Cliff Jones and David Lindsey worked with me and brought out my sound and story, in the same manner [as] Jimmy Jam, Terry Lewis did Janet Jackson. It was an incredible experience.”

There has been some pushback from those who feel she is past her prime for being a recording artist. Traci’s advice to those who have negative thoughts and for those who want to pursue their dreams, “Never let anyone stop you from pursuing what God has for you. You never know how or when that blessing is coming. If people had some business of their own, they wouldn’t be so negative or unhappy and try to mind your business.”

Enough said! One more thing that Traci Braxton wants you to know: “Don’t Bootleg My Music!”