Student of the Week: Jordan Cofield 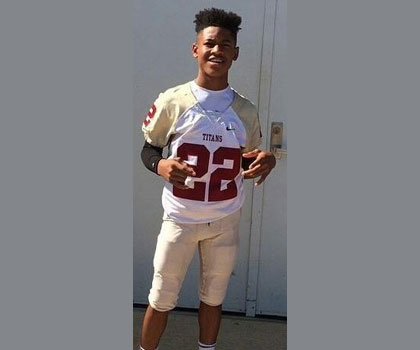 This week, Indie Soul has tapped a young African-American teen, Jordan Cofield of New Town High School as the Student of the Week. Normally, we stay away from athletes because they are often spotlighted, but with so much negativity surrounding black athletes lately, we wanted to showcase that this is not the case— there are many student athletes who are doing great in school and in the community. Jordan Cofield is one such person.

Jordan’s high grades prove that he takes his education seriously. He is in the Avid Scholars Program at his high school. He has volunteered at local nursing homes and participated in activities with dementia patients. Jordan also joins his mother during many of her visits to make donations of food to the women's shelter. He also joins her at events to inform about and advocate against domestic violence.

Nothing has been given to him. Jordan works hard for what he receives, which has taught him responsibility. He works at his father’s contracting company doing painting and drywall. He will attend Towson University’s football camp in the summer of 2015.

Congratulations are in order for Jordan because while attending an Offense-Defense Football Camp this past summer, 14-year-old Jordan Cofield of Owings Mills, Maryland was named an “Offense-Defense All-American” and invited to participate in the 9th annual Offense-Defense Bowl Week festivities taking place at the Citrus Bowl in Orlando, Florida. Running back Cofield, was selected for this honor from thousands of young athletes from across the country.

Putting in work in the classroom, the community and on the field, has earned Jordan Cofield our Indie Soul Student of the Week.