Young golfer excels on links and at school 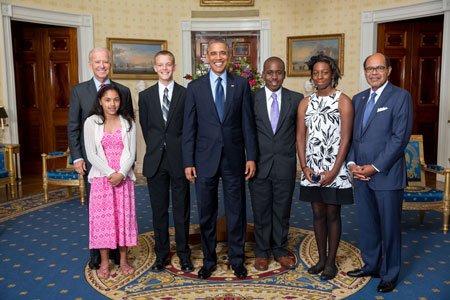 Kendel Abrams is in the running for “Girl Golfer of the Year.” She led her high school golf team to a third place finish in the recently completed season and, before it’s all said and done, the 14-year-old could be competing for a state championship. (Official White House Photo by Amanda Lucidon)

Kendel Abrams is in the running for “Girl Golfer of the Year.” She led her high school golf team to a third place finish in the recently completed season and, before it’s all said and done, the 14-year-old could be competing for a state championship.

The Mount de Sales Academy student has blazed a trail at a young age, even snagging an invitation to the White House where she posed for photos with President Barack Obama and Vice President Joe Biden. She has met Tiger Woods and Phil Mickelson, two of the top golfers in the world.With a 9-handicap and steadily improving, Kendel may be able to teach the pros something about hitting the fairway and staying on the green.

“I love the challenge of golf,” Kendel said. “I’m not sure how I focus so much, but I figure things out for myself and, if for some reason I can’t figure it out, I ask.”

Her dad and ardent supporter, Ken Abrams says his daughter definitely has a knack for figuring things out. He said at times she’s so good, not even he can caddy for her. “I just rather be a spectator,” he said.

Kendel has won a U.S. Kids for Golf tournament, and a qualifier tournament in Bowie, which allowed her to compete in the Callaway Junior World Golf Championships in 2013.

Earlier this year, she captured the Optimist International Qualifier in Upper Marlboro and the Tiger Woods Foundation selected her to be a standard-bearer at Congressional Country Club for the President’s Cup held in June.

“I’m very proud of her, she’s a terrific child and she’s certainly has done wonders,” Abrams said. “I think because of the kind of curriculum she’s always had–she has honors classes, so she’s always been challenging herself. That’s one thing about the sport of golf, a lot of people think you’re playing others but you’re really playing against yourself.”

It wasn’t always about golf for Kendel, who’s a member of First Tee Baltimore and the Clifton Park Junior Golf Program in Baltimore. She played and excelled in basketball, soccer, tennis and swimming before finally settling on golf. “I took Saturday class at Forest Park and one of our instructors there participated in golf and I just loved it,” Kendel said. “I didn’t imagine this because back then I was an all-around athlete, but I just decided on golf.” Talented in several sports, Abrams said it was a good problem to have as a parent.

Kendel, who dreams of playing on the LPGA Tour, is now writing a blog for African American Golfer’s Digest, a nationally-distributed publication that covers golf and the lifestyle of those who play.

Kendel will cover various topics including caddying, fitness tips and she’ll profile her mentor, Renee Powell, who was the second black woman to play on the LPGA Tour. When pressed for more information about her blog, Kendel was tightlipped.

“I can’t tell you what I will write about specifically,” Kendel said. “But, I will say that I’m involved in a lot of activities.”

Just like her golf game, Kendel’s columns should be nothing short of amazing, her father said.

“Everything that she’s done, her schooling, her game, she’s exceeded our expectations,” Abrams said. “She does everything on a higher level and she makes it a habit of not just doing something, but doing it very well. She spends a lot of hours making sure she gets everything done and the bigger thing is that she’s looking at a Division I college, so she knows she has to be focused and she has to have the grades.”