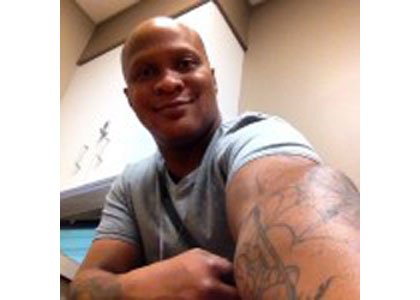 (NNPA) — If you’re not familiar with the Chicago Rap music scene you may not have heard of Twone Gabz. Known to family and friends as Antwone Muhammad, he has been in the music business for almost 15 years, featured on projects produced by Grammy award producer, No I.D., Kanye West, Terry Hunter, DJ Jazzy Jeff, Erick Sermon and collaborations with Chicago artists; Mikkey Halsted, GLC, Keith Murray and Rhymefest among others.

A trip to the emergency room changed the entire scope of his world when tests revealed he had breast cancer. While taking a break from the music business to work in healthcare management Antwone noticed fluid leaking from his left nipple. The leakage occurred off and on for a couple of years until his visit to the emergency room.

Male breast cancer is a rare condition, accounting for only about one percent of all breast cancers according to medicinenet.com, but Antwone challenges this statistic. “They say it affects one percent of men, but those numbers are skewed because they are being updated based on census surveys. So, who’s really inviting a stranger into their house? Does the stranger ask you, “Does anybody in this household have cancer? My oncologist believes it to be like seven to 10 percent of men now,” he says.

To help fight depression and isolation, Antwone decided to share his ordeal on social media. “Some people really confide and open up,” he says. “It’s been great just to see people and how they’ve taken to it.”

Through the power of social media and online engagement, his open discussion has encouraged people to get mammograms and go to the doctor check-ups. In addition to talking with people on Facebook and Twitter, he has been documenting the process by filming his doctor visits. He’s also ending his five-year hiatus from the music business was by penning new lyrics for the music CD “The Tumor.”

Antwone says being in the music studio again helping him through his ordeal. “It’s been better than the actual treatment. As an artist, we can say certain things and put it in the words of a song, but when it comes to communicating with people it’s like the hardest thing for us.”

He continues, “When we make songs we become this person that we’re really not because we’re trying to seek acceptance from a lot of people. At some point, my music has to be therapeutic for me.”

One of his missions is to bring awareness to the African American community, particularly the Roseland community located on the far Southside of Chicago. “There’s more cancer in Roseland than anywhere in Chicago and if you look at Roseland Community Hospital, no one goes there. All of the factories, the dump sites, the dirty roads compelled me to discuss why the area has the highest cancer rate.” Inspired by what is going on in the community, Antwone is working with Roseland Community Hospital and releasing the first music video for the song, “Getting Through It.”