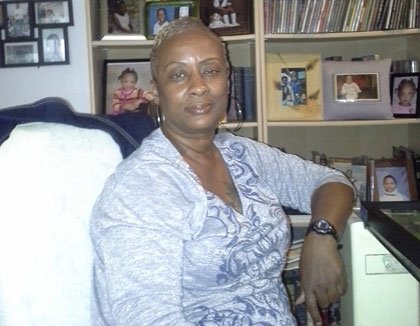 BALTIMORE — Each story of a breast cancer is defined by the patient.

In all the years that I have interviewed survivors, one thing stands out— the bravery and the amazing determination of the women who have this disease.

Bernadette E. Williams’ story is one of those instances. Before her diagnosis, Williams, 52, was living the good life with a good job, an expensive apartment and all the trappings of a middle-class lifestyle. The single mother of four had no reason to believe her life would change until a diagnosis of breast cancer changed all that.

Williams worked for a large security firm, Dunbar, which was under contract with the state to transport prisoners. Through her hard work she reached the rank of lieutenant.

“I had an apartment in Millersville, which I could afford and the car and the insurance,” Williams said. What she didn’t see coming was the lack of health insurance, which was denied because of a previous thyroid condition.

“This was before ‘Obamacare,’” she said. To add insult to injury, she also didn’t have any sick time.

She admits to not having had a mammogram. “I was scared of mammograms. My breasts are tender and I didn’t do breast self-exams either, ” she said

Before her health insurance could be renewed, a lump was discovered. At first, she was prescribed an antibiotic then she agreed to a mammogram and ultrasound.

The mammogram found a tumor which followed by a biopsy confirmed a malignancy. One lump was measured at 8 cm (about 3 inches). Williams agreed to surgery, but underwent chemo first to shrink the tumor. Because of the size of her breasts, she opted for a bilateral mastectomy. After surgery, she was prescribed Tamoxifen and chose to have reconstructive surgery.

Despite the double mastectomy, pre-surgical testing detected the cancer had metastasized and spread to her spine. She has been diagnosed at Stage 4.

In spite of this diagnosis, Williams hides whatever worries she may have. Her conversation is concise, articulate and matter-of-fact. In spite of all this, the diagnosis of cancer isn’t the end of her story.

All the seniority at her job was for nothing. She has no income, no health insurance and, recently, no place to stay.

“I applied for medical assistance,” she said, “only to find out that I’m not even in the system. I don’t have health insurance from my job because it was contractual and the contract ended. I can’t buy my medicines because I can’t afford it.”

She hopes that the medical assistance will be approved. She took the step of going through hospital social workers to apply because she learned that her local jurisdiction hadn’t even entered her application in the system.

As if that weren’t enough, she lost her apartment and moved in with her aunt, Doris Carberry. She feels grateful to Carberry, but like so many other survivors doesn’t want to burden friends and family.

William isn’t working; has no money, has lost her apartment, her insurance has lapsed and she has been frustrated at every turn.

“All I want is to be able to take care of myself,” she said. “[To] be a little more comfortable.”

She asked her oncologist how long she had: “Two years; five years; 10 years? I don’t know.”

What she does know is that her oncologist can “keep her comfortable,” and she knows what that means.

“Everything is pending,” she says, and you can hear the frustration in her voice.

“All I want is to have whatever I need to maintain a certain quality of life,” she said.

She ends with, “If it weren’t for Aunt Doris, I don’t know where I’d be. I am so grateful to her.”