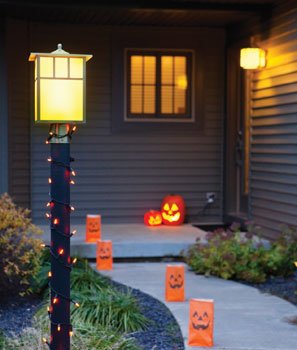 What would Halloween be without trick-or-treating? For youngsters, so much of the fun of Halloween involves scouring the neighborhood with friends in search of candy. While children may have their eyes on the sweet prize, parents may be concerned about their little ones' safety.

The United States Census Bureau says that an average of 41 million trick-or-treaters venture out every year across the country, and roughly 106 million homes are solicited for candy and other treats on this holiday. Such a high number of people out on the streets increases the risk of injury, and it can be easy for kids to get lost as well.

According to Kate Carr, president and CEO of Safe Kids Worldwide, a network of organizations geared toward preventing unintentional childhood injury, "Halloween is an important night for parents to be extra vigilant." But Halloween seems to lessen one's inhibitions, and wearing a costume and being hidden from others can encourage some revelers to engage in atypical and unsafe behaviors. To ensure everyone has a safe and fun Halloween, here are some safety tips to follow.