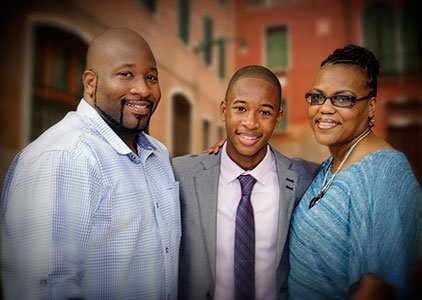 BALTIMORE — Yolanda Horton, a breast cancer survivor who was diagnosed at the age of 42, recalled a movie outing she had with her 10-year-old son Rodney Horton, Jr.

“My beautician had made me a wig because my hair had fallen out from chemotherapy,” said Horton. “I had taken my son to the movies one day, and took off the wig to scratch my head. Afterwards, I asked my son if it bothered him. He told me, ‘you are beautiful with or without the wig. From that day on, I never wore the wig again.”

Horton credits this kind of love and support from her family and friends, along with her faith in God for helping her through her breast cancer journey.

“You are a survivor the moment you receive your diagnosis,” said Horton. “I thank God for my support system. My mom moved in with us the first year I was diagnosed. She also helped me through my cancer treatments. They all walked the journey with me. I thank God for the people he placed in my life to help me through.”

Horton is now 46. At the time of her diagnosis, she was a newlywed, and was working at the University of Maryland Medical Center as a co-facilitator for a breast cancer program. A nurse, she and her husband Rodney Horton had been married for just three months.

“It was a devastating blow,” said Horton. “I had just gotten married in June, and received the phone call regarding my results in August. When I received the call, I was shopping in Giant with my son. I had a jug of milk in my hand. I put down the milk, called my husband, and went home. I will never forget that moment.”

She added, “Being a healthcare professional, I know and understand the terminology. That knowledge was both good and bad, because I knew what would come. As the co-facilitator for a breast cancer program, I was a support for so many of my patients. Now, it was my turn to walk that journey. I understand that God guided me, because He knew I would need that knowledge.”

According to Horton, her journey began when she went in for a mammogram.

“I was called back because they saw some tissues that looked strange. As a nurse and a breast program coordinator, I knew to ask them to read my report. Ultimately, I received a biopsy, which showed benign breast cancer cells, which are a precursor to breast cancer. It is always recommended to get these cells removed, which I did.”

“She took the size of a lemon out of my left breast to make sure she got all the tissue. In taking such a wide margin, she discovered I had an invasive form of breast cancer. We had to discuss treatment plans from there.”

She added, “The amazing part was that by taking such a large margin she got the benign and breast cancer tissues. Looking at my previous mammogram, I saw the breast cancer tissue there, and it never changed. Had she not taken such a large margin, it may have been another two to three years before my cancer was discovered. I know it was only through God’s grace that it was discovered when it was.”