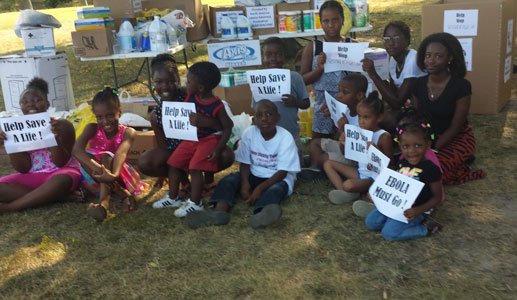 When he thinks about his family back in Liberia, he can’t help but be afraid. “People are scared,” he says. “I speak to people every day in my family and my community and they are panicking, they’re just scared.”

They’re scared because West Africa is in the grip of one of the largest Ebola outbreaks in history. Ebola is a deadly virus that damages the immune system and organs causing severe bleeding inside and outside the body. It spreads through direct contact with body fluids and kills up to 90 percent of people who are infected.

According to the latest numbers from the Centers for Disease Control (CDC) there are over 2600 cases and more than 1400 deaths in the affected countries of Guinea, Liberia, Nigeria and Sierra Leone. Liberia counts for nearly half of those deaths with 624 suspected Ebola deaths since August 22.

CDC director Dr. Tom Frieden traveled to the region this week and told NPR in an interview from the Liberian capital of Monrovia that the situation is, “overwhelming” and “unprecedented.” He said his agency "is working flat out on this, but this is huge and needs a global response. ... They need a lot of help from the world."

Boxes ready to be shipped to Liberia

As National Secretary for the North America Liberia Adventist Association (NALAASDA) Flomo decided to stop wringing his hands in fear and do something to help. On Sunday August 10, in conjunction with the Liberian Association of Maryland, NALAASDA held an Ebola Awareness and Donation Fund Drive at Deep Creek Middle School in Essex.

Over 250 people showed up to donate needed medical supplies including bleach, hand sanitizer and soap as well as protective clothing like surgical gowns, safety goggles, examination gloves and shoe covers. All of the materials are going to an Ebola center in Monrovia.

The need for medical equipment is real. Caretakers and healthcare workers account for a large number of the deaths due to their proximity to contagious body fluids as they care for sick patients. On Tuesday, WHO reported over 240 cases among health care workers. “In many cases, medical staff are at risk because no protective equipment is available – not even gloves and face masks. Even in dedicated Ebola wards, personal protective equipment is often scarce or not being properly used,” WHO said in a statement dated August 25.

The well attended donation drive drew Liberians as well as Americans who wanted to help. Flomo recalled a touching moment, “There was a little girl, an American, maybe 7 years old who came with her grandfather. She donated her whole savings. People teared up when they saw that.”

NALAASDA plans to hold another drive in the near future to help Liberia in its continuing battle against the worsening epidemic. Flomo says he’s grateful for American help including sending 50 CDC health workers to the region and sharing the experimental serum ZMapp that appears to have helped infected American missionaries Dr. Kent Brantly and health care worker Nancy Writebol.

The recent dire proclamations from WHO and the CDC are all the more reason for NALAASDA and the Maryland Liberian Association to continue their work. Flomo says the donation drive is the first of many and encourages the entire community, not just Liberians to support the drives.

“This is not just an African situation, this is a worldwide situation. When it’s all said and done the question will not be what did ‘they’ do to help us, but what did we do to help ourselves?”

For more information or to make a donation visit nalaasda.com.

The following areas have been designated as drop-off stations for medical supplies:

The Redeemed Christian Church of God