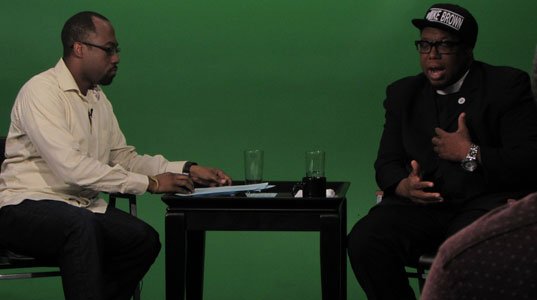 BALTIMORE — On Sunday, August 24, 2014, The Real News (www.therealnews.com) hosted a town hall meeting to discuss the shooting death of Michael Brown in Ferguson, Missouri and how African Americans can be more involved in finding solutions to problems in the community.

The event was hosted by Pastor Heber Brown III of Pleasant Hope Church and Reverend Lennox Yearwood Jr., president and CEO of the Hip Hop Caucus and it was recorded to be aired at a later date. Check The Baltimore Times Facebook page for more details.

The who’s who of the positive black voices in Baltimore attended, including: bloggers, educators and journalists. Everyone present had a chance to be heard and offered good advice and insight. It was truly one of the most refreshing events in recent memory. Here is just a sample from those who attened about their thoughts on the town hall meeting:

Janae True of JanaeTru.com: Being a part of this event was important in order to understand how Ferguson's uprising can be replicated in cities across the country. Assessing issues such as race, police militarization and black on black crime are important in order for us to move forward as a generation and save the next Mike Brown. After this discussion I would like Baltimoreans mobilized toward demanding safer streets and regaining control of our communities.”

Jimmie Thomas (Co-Founder of Curators of Hip-Hop): “This meeting was important because it had a diverse group of change makers in the communities. There were no talking heads and it was a real and true conversation from solution seekers in the Baltimore area. Often times when there is a town hall meeting there are people who are not doing stuff in the community engaged in conversation. It's usually angered and frustrated everyday people who are asking for solutions. This was a backroom meeting of the people who are solving problems in their community without the backing of outside influences. So it really comes from the heart.”