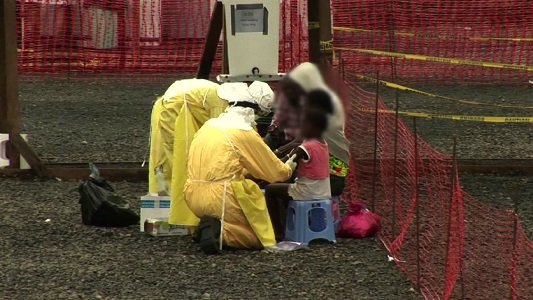 Medecins Sans Frontiers, or Doctors Without Borders, work inside the high risk zone of its Ebola treatment center in Monrovia, Liberia. (MSF)

(CNN) — The Ebola outbreak in West Africa is much worse than official figures show, and other countries are unintentionally making it harder to control, Centers for Disease Control and Prevention Director Tom Frieden told CNN Tuesday.

"We've seen outbreaks of Ebola before. This is the first epidemic spreading widely through many countries and it is spiraling out of control," said Frieden, who recently returned from a trip to the region. "It's bad now, much worse than the numbers show. It's going to get even worse in the very near future."

More than 2,600 people have been infected by Ebola in Liberia, Guinea, Sierra Leone and Nigeria since the outbreak began in December, according to the World Health Organization. More than 1,500 have died.

Other countries are turning their backs on those coming from countries where the outbreak is strongest, even if they don't realize it, he said.

Measures to restrict flights and border crossings into the countries facing the outbreak were designed to contain the spread, but are having a paradoxical effect, Frieden said.

"This is making it really hard to get help in and to respond effectively to the outbreak," he said on CNN's "New Day."

"What we're seeing is a spiraling of cases, a hugely fast increase in cases, that's harder and harder to manage," he said. "The more we can get in there and tamp that down, the fewer cases we'll have in the weeks and months to come."