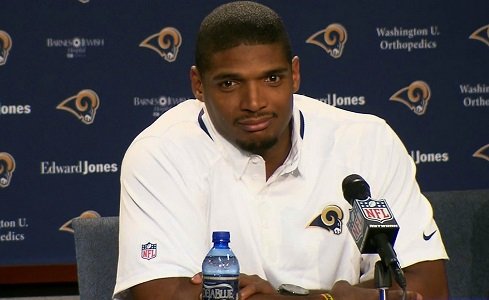 Michael Sam speaks at a media availability in St. Louis, Missouri on May 13, 2014. He was one of the Rams' draft picks, and is the first openly gay player drafted to the NFL. (CNN)

(CNN) — He may not play on game days, but Michael Sam -- the first openly gay man to be drafted into the NFL -- will at least have a home in the league once the regular season starts: the Dallas Cowboys.

The Cowboys announced Wednesday they'd signed the former University of Missouri defender to their 10-man practice squad, a group that plays during the week with members of the 53-man roster but not during official games.

That means Sam isn't likely to record a sack or tackle in front of national television cameras anytime soon. Even so, his signing -- in light of all the attention he has received, as a possible groundbreaker in pro football -- drew plenty of attention.

Jerry Jones, Dallas' high-profile owner, president and general manager, cast the signing as a football decision for the club that is sometimes dubbed America's Team.

"The facts are that, if he's good enough to develop as a practice squad (player) and could evolve -- as many players do -- ... into a contributor, then that would be a plus for the Cowboys," he told reporters. "That's it."

Jones touched on Sam's strengths and weaknesses, describing him as a "relentless" worker and pass rusher who "is going to have to make for a little speed (and) make up for a little size."

"But how many times have we seen that happen?" the Cowboys' owner and general manager said. "That's what makes football."

One thing that Jones did not express any reservations about is how Sam will fit in the locker room.

He noted that his son, Stephen Jones, Dallas' chief operating officer and director of player personnel, is "really close friends" with Jeff Fisher, the St. Louis Rams head coach. The Rams drafted Sam -- an All-American defensive end in college -- in the seventh and final round of the NFL draft last May, only to waive him Saturday after four preseason games.

Talking about what Fisher told the Cowboys executive about Sam, Jerry Jones said, "He was an addition to their locker room, he brought a plus to the locker room."

Fisher praised the signing as "a great decision by the Cowboys," especially given the injuries they've suffered recently on their defensive line.

"I hope Mike gets a chance," the Rams coach said. "Maybe he can help them."