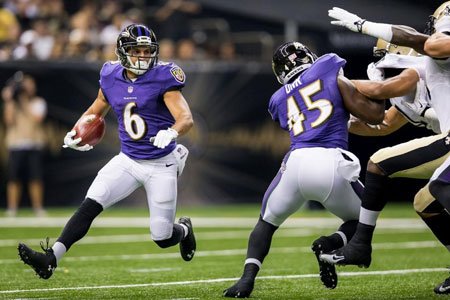 BALTIMORE — The Baltimore Ravens will have an even more local flavor to them now that Clarksville native Michael Campanaro is on the team. The team traded a sixth round pick in the 2015 NFL draft that allowed them to get in position to draft Campanaro in the seventh round of the 2014 draft.

Getting to play for his home team is something that Campanaro cherishes. He says he played in Pee Wee football games at M&T Bank Stadium and he also played in two state championships in front of the local crowd. His face had a different glow to it when he talked about getting to put the Ravens jersey on and playing in the NFL.

It has been well documented how the competition at receiver was a fierce race that went down to the wire. Campanaro made the cut despite missing some time due to injury. He turned a negative into a positive by displaying the hard work mentality that his family has, especially during weight training.

“I was nicked up early, but I showed the strength staff how hard of a worker that I am by coming in on my days off and working to get back from injury. You have to do the things like that to get yourself ready for the season.” Campanaro said.

Campanaro is only 5’ 9” and 185 pounds but he has a lot of heart. That heart allowed him to take on bigger linebackers such as Courtney Upshaw during running plays in training camp. That’s why the Ravens use him in the slot and motion him inside to seal the edge when they run the ball on stretch plays outside of the tackles.

He has the right mindset when it comes to playing in a league where most of the guys are bigger than him.

“Being this size and playing in the NFL, your mentality has to be to just do whatever for your team. Blocking is a mentality; you have to want to do it. When your number is called, you have to go out and make plays because you don't get too many chances as a rookie,” explained Campanaro.

Playing the slot position takes more than just heart though. It requires a sure-handed receiver with great short area quickness. This is definitely a strong point for Campanaro. His 4.01-second short shuttle and 39 inch vertical at the NFL scouting combine showed that he is a quick, explosive athlete.

Ravens receivers coach Bobby Engram saw these qualities during training camp. “Michael has great feet. Engram said. “He has a lot of quickness. He understands how to separate. He’s a smaller guy but he’s strong. He knows how to leverage himself to create separation and that’s what you really look for in a slot receiver.”

The versatility Campanaro brings to the team is why he made the roster. He played a lot of slot in college at Wake Forest and is their all-time leader in receptions with 229. He also was a dangerous return guy.

Playing for the Ravens gives him a new opportunity. Campanaro will get to line up outside as well as in the slot in the NFL. He has leaned heavily on veteran receiver Steve Smith Sr. as he learns how to work outside the numbers. Smith is another smaller receiver but plays much bigger than his size.

One hurdle that he has attacked head on is learning the playbook. “The playbook is something that you can never be too comfortable with. You have to stay on top of it. I think I’ll play faster out on the field once I truly get it down, ” he admitted.

This season will be a special one for Campanaro, not only because it’s his rookie season. He gets to play for the team that he grew up rooting for, his hometown Baltimore Ravens.