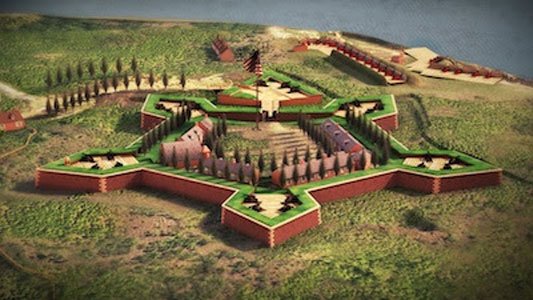 BALTIMORE — Students and teachers returning to the classroom this month are invited to join a live, once-in-a-lifetime distance learning web cast on Tuesday, September 9, 2014, as part of the 200th anniversary celebration of the Star-Spangled Banner. The free, one-hour program will be broadcast live from Fort McHenry National Monument and Historic Shrine, site of the 1814 Battle of Baltimore than inspired Francis Scott Key to pen the words that became our National Anthem.

During the webcast, which starts at 12 p.m. rangers from the National Park Service and historians will discuss everything Star-Spangled Banner and answer student questions submitted during the 60-minute broadcast. Although the program is free, educators are required to register for the electronic field trip at: www.starspangledbannerlivingflag.org; click on “Connect” to register. The broadcast will occur as more than 7,000 Maryland students at Fort McHenry will don red, white and blue to form the Star-Spangled Banner Living Flag, the largest ever created.

“The defense of Fort McHenry and the writing of the Star-Spangled Banner are defining moments in our nation’s history, when Americans rich and poor, black and white, male and female, free and enslaved banded together to defend their country’s young democracy,” said Tina Cappetta, superintendent of Fort McHenry National Monument and Historic Shrine. “We invite schools worldwide to join in this once-in-a-lifetime opportunity which will connect them with two of our nation’s greatest symbols of freedom and democracy— the American flag and the National Anthem.”

Maryland Governor Martin O’Malley has declared Tuesday, September 9 to be Star-Spangled Banner Living Flag Day in Maryland and governors in several other states across the country have issued similar proclamations.

As a complement to the online program, the website provides educators information on how to create a living flag at their school, plus links to grade-appropriate educational materials for primary and secondary students. The website also includes a wealth of information, including background on the War of 1812, historic photos and more from the Friends of Fort McHenry, National Park Service, the Maryland War of 1812 Bicentennial Commission and Maryland Public Television and Star-Spangled 200.

The Star-Spangled Banner Living Flag distance-learning program is a joint program of the National Park Service and the Friends of Fort McHenry.