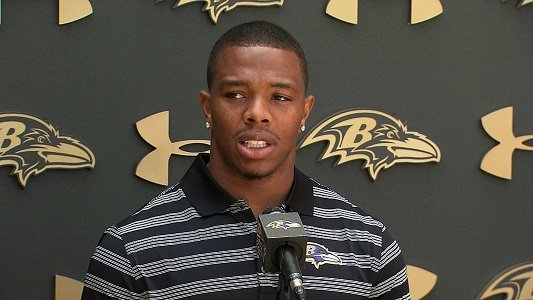 Ray Rice, the Baltimore Ravens running back suspended by the NFL for two games after video showed him dragging his then-fiancée (now his wife) from an elevator, told reporters on Thursday, July 31, 2014 his actions were "inexcusable." (CNN)

The Baltimore Ravens have terminated the contract of Ray Rice Monday. TMZ.com released a new video that showed exactly what happened in the elevator the night that Rice assaulted his then fiance. This move is a bold stand for the Ravens. Rice was under league suspension until next week. He will no longer be a member of the organization. Additionally, the NFL has suspended Ray Rice indefinitely.

The video definitely caused a large reaction from fans, current players and former players. The Ravens would have suffered from a great deal of backlash had they not taken any action. They initially supported Rice but things have clearly changed after the video.

It should be noted that head coach John Harbaugh's brother Jim is also facing a similar decision with his San Francisco 49ers. One of their players, Ray MacDonald was recently arrested and charged with assaulting his pregnant girlfriend. In the interest of due process, it is not right to jump to any conclusions but Jim Harbaugh publicly said that any form of domestic violence is grounds for a player being released. It looks like John Harbaugh and the Ravens took heed to that.

The decision to release Rice comes after the Ravens encountered trouble running the football in their season opener against the Cincinnati Bengals. Bernard Pierce was not effective on the ground and fumbled the ball which resulted in his being benched. Justin Forsett ran the ball well, gaining 70 yards on 11 carries. As a team, the Ravens only had 91 yards rushing.

The release of Ray Rice leaves the Ravens in an interesting situation in terms of their running backs. They will be on the hook for $14,250,000 in dead money. It will be split up into two installments. The first is in 2014 and amounts to $4,750,000 while the second one is $9,500,000 in 2015 as per spotrac.com. Fitzgerald Toussaint is a running back that is currently on the practice squad but could be signed to the active roster to replace Rice. He was productive in the last preseason game against the New Orleans Saints.