Hands-on with the new Apple Watch 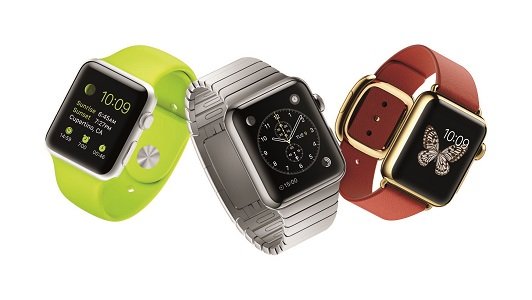 Apple unveiled the Apple Watch smartwatch, the company's first wearable device, at their September 9, 2014 announcement. The Apple Watch pairs with iPhone 5 or newer to display notifications. It features a magnetic charger, health and fitness apps and a crown that controls zoom and scrolling with a twist. (Photo: Apple)

(CNN) — After Tuesday's unveiling of two new iPhones and a heavily anticipated smartwatch, Apple gave press and special guests (including models, fashion bloggers and Gwen Stefani) some supervised hands-on time with the gadgets. Here are our first impressions of the Apple Watch.

This watch is still under construction

It appears Apple is still ironing out the details of its new smartwatch, which is scheduled to be available early next year.

In the large white showroom Apple custom built for the event, rows of iPhone 6s and Apple Watches were on display. While everyone was welcome to pick up and test the phones, interaction with the watches was carefully controlled. The available demo units ran a prerecorded loop of screens and features, so there was no real testing of the touch screen, buttons, dials or user interface. Apple employees put them on people's wrists and removed them. (They wore working versions of the watch and demonstrated a few features.)

The company is still mum on many of the device's specs, including memory, battery life and screen resolution. The exact differences between the low-, middle- and high-end watches are also still blurry. Behind the scenes, the company is likely rushing to iron out any issues with the entirely new operating system and hardware.

One thing we can start judging is looks. Full disclosure: I have dainty wrists. I have tried on many smartwatches and, so far, the straps and watch faces have all been cartoonishly large and heavy.

Apple has always focused heavily on the design of its products, and that legacy really shows with the Apple Watch. There are a surprising number of options. There are three versions of the square watch face, each with its own color selection (including an actual 18 karat gold enclosure). All are available in two sizes (the small is 38mm and the large is 42mm) and there are six strap styles.

When I tried on the smaller size, it actually fit just like a somewhat oversized but normal watch. It seemed lightweight enough to wear all day and it was curved to be flush against my wrist (necessary for the heartbeat sensors on the back to work). The sportier plastic bands might be useful for workouts, but they look a little cheap. The nice metal and leather straps are on par with what you'd find on a similarly priced watch.

At a glance, there is a chance someone might mistake an Apple Watch for a regular timepiece. Once you look closer, it's obvious the square screen is not a real watch face. No matter how cool the features, that could be a turn-off for many potential customers.

This is not a wrist phone. You can't write emails on it. If you want to have in-depth communications, you'll need to use your iPhone (don't worry, it's already in your pocket because you have to have it for many of the watch's features).

The size of the watch face makes using a full keyboard hard if not impossible (no apps with a keyboard were shown, but that doesn't mean one can't pop up later). To communicate from your wrist, you dictate messages to the watch or use it as a walkie-talkie to chat with another Apple Watch wearer.

Apple is really hoping people will choose to communicate using what it calls Digital Touch, a combination of drawings and vibrations. You can doodle with your fingertip, tap out a special series of vibrations or send your actual heartbeat. This shorthand could become the next Emoji, or it could be Apple's Poke: something fun people do for a while before forgetting about it.

Apple CEO Tim Cook and other Apple employees repeatedly used the word "intimate" to describe the watch's communication features. Perhaps that's because only someone you know intimately will have any clue what you mean when you send a line drawing of an octopus and the bass line to "Under Pressure."

Apple would not disclose the battery life of the watch. That could mean the company is trying to downplay the short battery life or that it is still working on the technical details and hopes to improve it before the release date. During a demo, an Apple employee said the company expected people to charge their watches every night.

One way it saves power is by only turning on the display when you lift your wrist to glance at it. But it's still a full-color screen with multiple sensors. Without a major leap in battery technology, more than half a day is still a lot to hope for from a smartwatch.

The device does not charge wirelessly. It needs to physically connect to a large circular charger that attaches via magnets to the back of the watch face, much like the current MacBook MagSafe cords do. That charger has a wire that plugs into a wall.

It is an all new proprietary charger. While the magnets might make plugging the watch in "easier in the dark" as Apple promises, it also means adding yet another cord to your power strip. And if nightly charging is necessary, that means your charger goes on every overnight trip.

Too soon to judge

There is still much we don't know about the Apple Watch. To make any reasonable guess about its fate, we would need to navigate the operating system, use the watch's touch screen (which differentiates between a tap and a push), and test the digital crown (a knob) on the side. Cook said the time was incredibly accurate, but how about the various fitness measurements and heartbeat?

Then there's the demand question. Are consumers really clamoring for a notification screen, credit card and fitness tracker on their wrist, especially one that's dependent on having an iPhone nearby? Smartphones can do many of these exact same things (especially with the iPhone's improved fitness tracking features).

After the legions of Apple fans and early adopters slip them on, will regular people swap out their Casio for an Apple Watch?