HBCU Roundup: Coppin State’s Christina Epps up for NCAA Woman of the Year 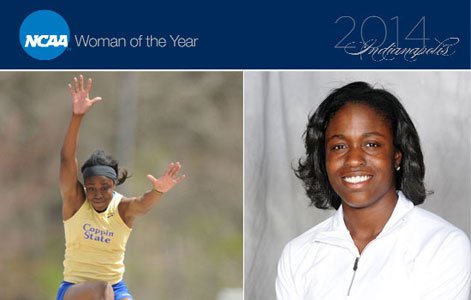 Coppin State University track and field standout Christina Epps has advanced to the top 30 round in the 2014 NCAA Woman-of-the-Year selection process.

Epps is one of 10 women from NCAA Division I who is still in the running for the prestigious award. In late September, three women from each division will be selected as the nine finalists for the award. Epps, along with the other women will attend the annual ceremony on October 19, 2014 in Indianapolis, home of the NCAA headquarters, where the 2014 Woman of the Year will be announced.

The award celebrates the achievements of senior female student-athletes who have excelled in academics, athletics, community service and in leadership roles. Epps is the first Coppin State University female student-athlete and one of two from the Mid-Eastern Athletic Conference (MEAC) to be among the top 30 this year. The other is University of Maryland Eastern Shore bowler Megan Buja.

“I am extremely blessed and honored to represent Coppin State,” Epps said. “Being named the MEAC Woman of the Year and advancing into the top 30 is very humbling. I always look back and realize how truly blessed I am. God has given me the talent. I am really proud of myself but I know there’s more that I want to accomplish. This is all God. I acknowledge God in everything that I do and basically there are no limits on how far you can go in life, if you put God first. That’s how I live my life.”

Woman of the Year is awarded to the student athlete for of outstanding achievements in academics, athletics, community service and leadership. The top 30 collectively earned a 3.85 grade-point average and more than 90 Academic All-America honors. The top 30 also earned nearly 27 national championships either individually or as a team and 38 All-America honors in their respective sport. They also spent more than 24,000 hours volunteering during their college careers. Many of the nominees served as team captains and held leadership positions in various campus and community organizations.

The HBCU Round-Up is compiled by Phinesse Demps